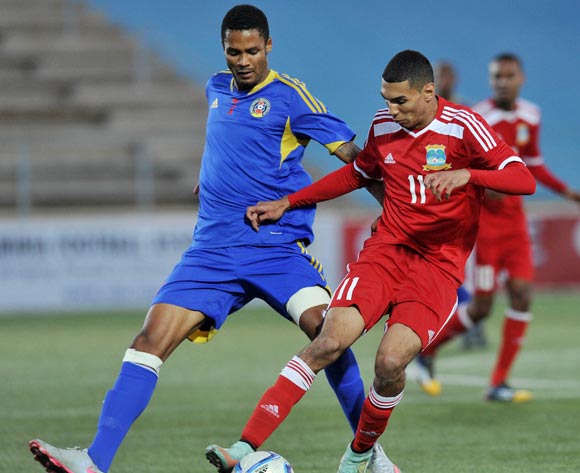 Carl Hopprich of Seychelles challenged by Felix Badenhorst (left) of Swaziland during the 2016 Cosafa Cup match between Swaziland and Seychelles at Sam Nujoma Stadium in Windhoek Namibia on 13 June, 2016 ©Muzi Ntombela/BackpagePix

Good afternoon and welcome to AfricanFootball.com for our live coverage of the 2016 Cosafa Castle Cup quarterfinal clash between Zambia and Swaziland from the Sam Nujoma Stadium in Windhoek, Namibia.

Swaziland will face South Africa for a place in the final on Wednesday.

Swaziland - Ginindza - SCORES (4-2) - PANEKA by the goalkeeper and Swaziland win!

- Penalties will decide the clash.

90+3' - CHANCE! Badenhorst with a late chance to win it, but Zambia survive.

80' - Into the final 10 minutes of the clash and Swaziland are yet to make a change to their starting eleven. Penalties will proceed if there is no winner after regulation time.

68' - Zambia have made two changes with Sautu and Daka coming on for Chipolopolo. Chances have dried up following what was a thrilling start to the second stanza.

60' - Hour played in Windhoek and we are yet to see a goal. Plenty of chances created by both teams though.

50' - POST! Luchanga almost makes Nhleko pay for his miss at the other end...the Zambia striker unlucky to see his shot canon off the inside of the post.

49' - UNBELIEVABLE MISS! Badenhorst with an precise cut back to pick out Nhleko who guides his shot wide with the goal at his mercy.

40' - GREAT SAVE! by Ginindza to deny Mbewe's rasping effort from whistling into the back of the net.

37' - CHANCE! Badenhorst loses his marker, but is unable to guide his header attempt on target. Zambia now struggling to control the Swazi striker.

31' - GOAL - NO! Badenhorst nods in but the assistant referee's flag is raised for offside. Replays suggest he wasn't.

30' - Great chance for Ndzinisa who has time a space inside the area, but can only manage to force Munyao into a good save.

30' - Zambia have dominated territory and as a result limited the dangerous Felix Badenhorst  to shots from range.

20' - CHANCE! Lovely turn by Mbewe to lose his marker, but his resulting left-footed shot is straight at Ginindza who makes an easy save.

16' - Zambia starting to find their range, Swaziland struggling to deal with crosses into the area, something Chipolopolo will try and exploit throughout the clash.

9' - Positive start by Swaziland. Pin-point cross into the area by Mabila almost guided into the back of the net by Ndzinisa who see's his header attempt fly inches wide of the right-hand post.

1' - Kick-off in the Namibian capital.

- Chipolopolo, four-time champions of the Southern African showpiece, received a group stage bye and enter the tournament at this stage of the competition.

- Sihlangu Semnikati qualified for the knockout stages as Group A winners having accumulated seven points from three matches.