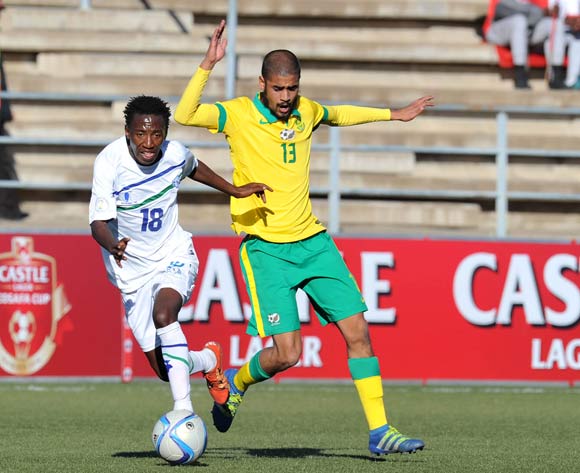 Swaziland will look to secure their first-ever appearance in the final of the Cosafa Cup when they take on rivals South Africa in the 2016 tournament’s first semifinal. The match is set for the Sam Nujoma Stadium on Wednesday, kick-off at 18:00 CAT.

Swaziland have played some fine football in this year’s competition and remain unbeaten after four matches – in fact, their unbeaten run in the Cosafa Cup stretches back to the 2015 edition as well and stands at seven matches overall.

Sihlangu Semnikati finished top of Group A ahead of Cosafa Cup heavyweights Zimbabwe and then ousted another of the competition’s big names, Zambia, with a penalty shootout triumph in the quarters.

The star of Swaziland’s run to the semifinals (which equals their best showing in the competition) has undoubtedly been Felix Badenhorst: The 27-year-old is the tournament’s top scorer with five goals and is being linked with a move to top South African teams.

“[Badenhorst] is a gem,” Swaziland coach Bulunga said of the striker. “His main strength is his heading ability and composure in front of goal.

“I believe he deserves the chance to play in a professional league, so I am hoping that the stories that are coming out that teams are interested in him are true so that he can go out there and gain experience of rubbing shoulders with other professionals.”

South Africa, meanwhile, booked their place in the last four thanks to an unconvincing penalty shootout triumph over Lesotho in the quarterfinals.

Jane Thaba-Ntso put Lesotho ahead, before Bafana Bafana struck back through Gift Motupa to level the game at 1-1. Shakes Mashaba’s side then triumphed 4-2 on penalties to edge their way into the penultimate stage of the competition.

The teams’ contrasting form coming into the semi perhaps casts Swaziland as the favourites but coach Mashaba has no problem with that.

“I like the fact that we are termed the underdogs of the tournament, that gives us the energy to work harder and become the champions of the Cosafa,” said Mashaba after edging Lesotho on penalties.

“Nobody is giving us a chance, which is why I am saying it is important for us to make sure we become the champions.”

South Africa have a 100 percent record against Swaziland in official international matches, winning all five of the teams’ meetings according to FIFA.com’s official head-to-head statistics.