Mozambique succumb to a 3-0 loss against Namibia 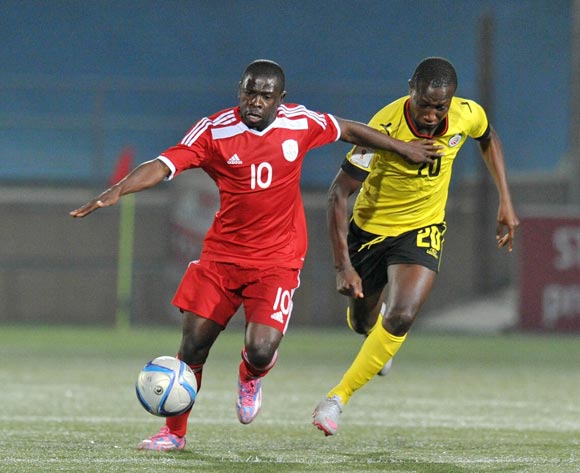 Wangu Gome of Namibia challenged by Pedro Timbe of Mozambique during the 2016 Cosafa Cup Plate Semifinal match between Namibia and Mozambique at Sam Nujoma Stadium in Windhoek Namibia on 21 June, 2016 ©Muzi Ntombela/BackpagePix

Mozambique failed to get a win as they lost 3-0 to Namibia during their 2016 COSAFA Castle Cup Plate semi-final encounter at the Sam Nujoma Stadium on Tuesday night.

On the other hand, the defeat means the end of the road for the Mambas as they are out of the tournament together with the first semi-final losers, Lesotho.

As early as the third minute, the Mambas suffered a great blow when their skipper, Apson Manjate, was shown a red card after a dangerous foul on Denzil Hoaseb.

The hosts and 2015 champions continued their dominance, but failed to capitalise as Keimuine couldn't keep his shot low in the 27th minute.

With nine minutes remaining on the clock before the break, Bruno Langa’s delivered a free-kick into the box which forced a save from goalkeeper Maximillian Mbaeva.

Nevertheless, five minutes into the second stanza Keimuine gave the Namibians something to cheer about when he finished off Hotto’s low cross,1-0.

Abel Xavier's men tried to get back in the match, but Hotto made it 2-0 after unleashing a wonderful left-footed shot to beat keeper Nelson Logomale in the 73rd minute, 2-0.

It was not over yet for the Namibians as Somaeb made it 3-0 with six minutes to go when he capitalised on a poor back pass and managed to beat the oncoming Logomale.

Although three minutes were added after the full 90, the Mambas couldn't penetrate Namibia and lost the match.