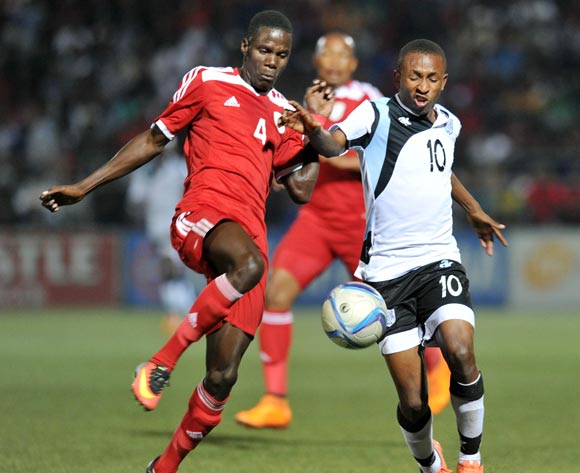 Onkabetse Makgantai of Botswana challenged by Ferdinand Karongee of Namibia during the 2016 Cosafa Cup Quarterfinals match between Botswana and Namibia at Sam Nujoma Stadium in Windhoek Namibia on 18 June, 2016 ©Muzi Ntombela/BackpagePix

Orapa United forward Onkabetse Makgantai has reportedly caught the eye of scouts at the on-going 2016 COSAFA Castle Cup in Namibia.

The winger-cum-striker alongside his Botswana teammate Mwampule Masule have been outstanding at the regional tournament in Zebras colours.

According to local reports Makgantai impressed talent scouts with his displays against Namibia in the quarter-final encounter last weekend.

The former Botswana under-20 forward's header led to the Zebras goal as Dacosta Angula netted an unfortunate own-goal.

The promising forward also had a good game against Democratic Republic of Congo (DRC) in the semi-final clash in midweek helping the Zebras beat the Leopards.

The former Nico United frontman and his Zebras team-mates will take on South Africa's Bafana Bafana in the final in Windhoek on Saturday.