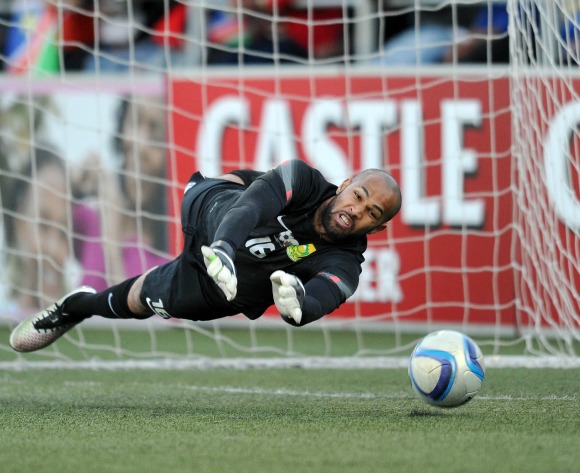 Reyaad Pieterse of South Africa saves a penalty during the 2016 Cosafa Cup Quarterfinals match between Botswana and Namibia at Sam Nujoma Stadium in Windhoek Namibia on 18 June, 2016 ©Muzi Ntombela/BackpagePix

Head coach of the South African Senior Men’s National Team, Ephraim Shakes Mashaba has made two changes for the COSAFA Castle Cup final clash against Botswana which will be played this evening (Saturday, 25 June 2016) at the Sam Nujoma Stadium in Namibia.

Reyaad Pieterse has recovered from his injury and returns to goals after he was substituted in the semi-final clash against Swaziland, which Bafana Bafana won 5-1.

The back four has a slightly different look about it. Tercious Malepe retains his place after an impressive debut against Sihlangu, and will play alongside captain Rivaldo Coetzee in central defence. Tebogo Moerane will start at left back, while Abbubaker Mobara has been moved from midfield to right back to take the place of Thembela Sikhakhane.

Menzi Masuku, who scored a brace from the bench in the last match, gets his first start of the tournament. Deolin Mekoa, Aubrey Modiba and Lebogang Phiri complete the midfield.

Striker Gift Motupa makes a return to the team after serving his one-match suspension and will be partnerned by Judas Moseamedi. Motupa takes the place of Thabiso Kutumela.

Mashaba is excited at the prospect of lifting the COSAFA Castle Cup trophy and ruling the region again. Bafana Bafana have won the COSAFA Cup on three occasions – 2002, 2007 and 2008, but he won't take Botswana lightly.

“The Zebras of Botswana are a great team and we will give them the respect they deserve. We have watched all their matches during the tournament and know their strengths. We are looking to build from our last match where we managed to score five goals, however; we do not want to concede an early goal like we did in our first two matches as it might prove dangerous for us. We have managed to get away with it on two occasions, and we might not be lucky this time. So we have to be certain that we do not let them in,” said Mashaba.