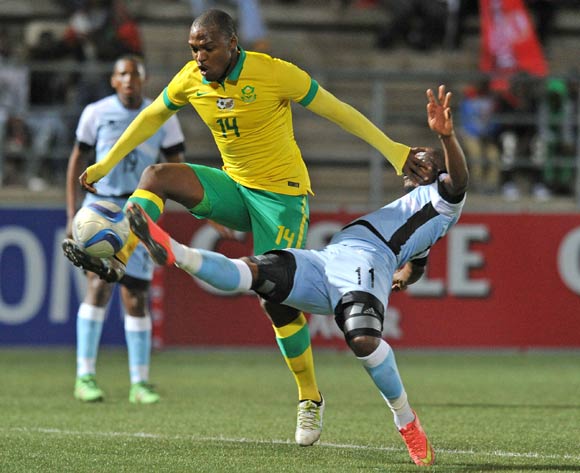 Gift Motupa of South Africa tackled by Lesego Galenamotlhale of Botswana during the 2016 Cosafa Cup Final match between South Africa and Botswana at Sam Nujoma Stadium in Windhoek Namibia on 25 June, 2016 ©Muzi Ntombela/BackpagePix

Hello and welcome to the live coverage of the 2016 COSAFA Castle Cup final between Botswana and South Africa at the Sam Nujoma Stadum in Windhoek.

89' This could be the winning goal for Bafana. Botswana 2-3 South Africa

88' GOAL! Motupa scores from the spot-kick

85' CLOSE! Seakanyeng unleashes a powerful shot which goes just over the Bafana goal.

70' GOAL! Seakanyeng's free-kick is dropped into the back of the net by Pieterse. 2-2

67' Once again Motupa is involved. The forward set up Kutumela who finished with an easy tap in

65' Botswana force three back-to-back corner-kicks, but South Africa manage to clear them away

49' Moseamedi bursts into the Zebras box, but Mafoko and Gadibolae manage to stop the Bafana centre forward

The second-half is underway

42' Motupa is sent through on goal and he's fouled in the Zebras box, but the referee blows his whistle for offside

38' Sesinyi pulls the rigger from range and his effort goes inches wide of Pieterse's left up-right. 1-1

33' GOAL! Motupa restores parity for South Africa from the spot-kick

29' GREAT SAVE! Moseamedi is sent through on goal, but Botswana shot-stopper Masule comes out rushing to deny the striker

26' GOOD SAVE! Pieterse denies Botswana forward Sesinyi with a decent low save

20' Masuku tries to find his Bafana teammate on the edge of the Zebras box, but his pass is intercepted

15' Moseamedi tries to unleash a powerful shot from range, but Mafoko blocks his attempt

10' Botswana captain Mafoko goes down injured and play is stopped. 0-0

3' Moseamedi finds the back of the net for South Africa, but the referee blows his whistle for offside