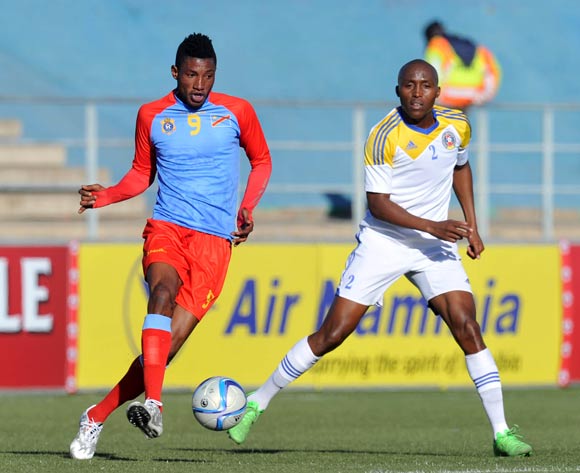 Lobi Manzoki of DR Congo challenged by Sifiso Mabila of Swaziland during the 2016 Cosafa Cup 3rd Place Play Off match between Swaziland and DR Congo at Sam Nujoma Stadium in Windhoek Namibia on 25 June, 2016 ©Muzi Ntombela/BackpagePix

A first half strike from Sabelo Ndzinisa secured a 1-0 win for Swaziland over the Democratic Republic of Congo in the third-place playoff at the Sam Nujoma Stadium in Windhoek on Saturday.

The Sihlangu Semnikati forward with the only goal of the game as Harris Bulunga men successfully claimed the bronze medal for a third time.

First, the DR Congo attacker saw his deflected effort whistle past the up right before Nhlanhla Gwebu pulled off a superb reflex save to deny Ngulubi with 27 minutes on the clock.

Ngulubi then saw his rasping effort canon off the crossbar 10 minutes later.

Ndzinisa provided the sucker punch soon after - completely against the run of play to give Swaziland the lead. The Swazi forward took one touch to open a pocket of space on the edge of the area, before launching an unstoppable left-footed shot past Ley Matampi.

Felix Badenhorst went close to doubling Sihlangu Semnikati's lead after the break, the tournament top scorer denied by Matampi who produced a top class save.

DR Congo failed to offer much in the second stanza with the Swazi defence holding firm as they successfully denied the CHAN champions.