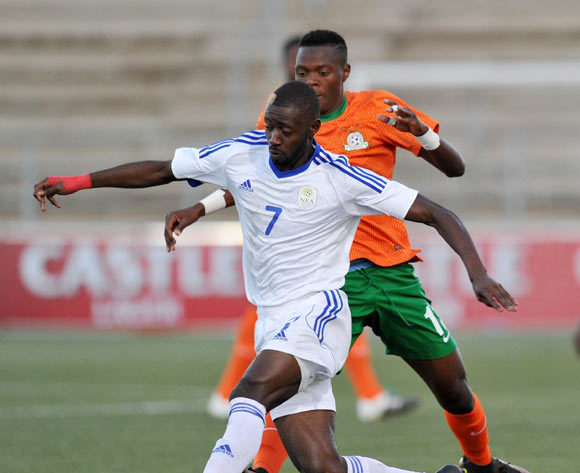 Deon Hotto of Namibia challenged by Patson Daka of Zambia during the 2016 Cosafa Cup Plate Final match between Zambia and Namibia at Sam Nujoma Stadium in Windhoek Namibia on 24 June, 2016 ©Muzi Ntombela/BackpagePix

Despite their 1-0 win over Zambia, the Brave Warriors failed to defend the cup they won in South Africa last year.

Ricardo Mannetti's men lost 5-4 on penalties to the Zebras of Botswana in the Cup quarterfinals, with Hotto missing the decisive spot kick.

The Golden Arrows player in South Africa's Premier Soccer League says they are disappointed that they failed to defend their crown.

"I knew I had it in me to come back. It was not easy but with the support I have around it was possible and scoring in the plate semis was great after missing that penalty against Botswana," said Hotto.

"It’s all in the mind and I stayed focused and had only one thing in my mind to use the next game to win the fans back.

“We came into the tournament with the aim of defending the cup at home and that was not to be so we were disappointed, but knew that football is a beautiful game and we got a chance to represent our nation with pride and achieved the best we could under the circumstances.

"Having the Head of State around, his loyal support kept us moving and to win the Plate in his presence meant so much."

Hotto scored a brace in the Cosafa Cup final last year as Namibia won what was their first Southern African title.