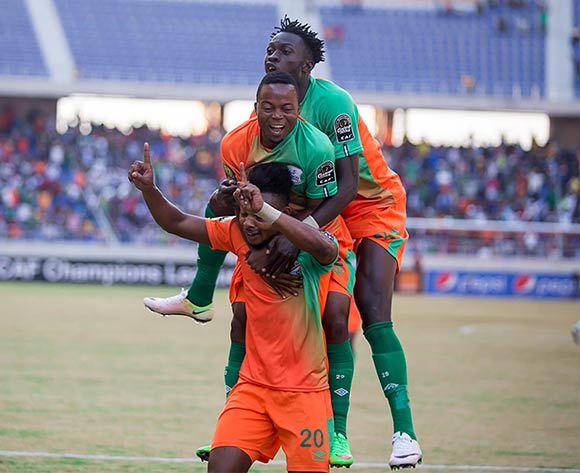 Idris Mombo of Zesco (below) celebrates goal with teammates during the CAF Champions League football match between Zesco and Asec Abidjan at the Levy Mwanawasa Stadium in Ndola, Zambia on 16 July 2016 ©BackpagePix

Welcome to coverage of the CAF Champions League Group A clash between ASEC Mimosas and ZESCO United from Stade Robert Champroux in Abidjan.

90+5' - Full time - ASEC 1-1 ZESCO - Done and dusted in Abidjan, it's finished in a draw. The Zambians will be delighted with that result, it takes them level with leaders Wydad Casablanca and within touching distance of the semifinals.

90+3' - ZESCO on the counter, Chama cuts inside from the left and shoots... saved by the 'keeper!

90' - There will be four minutes of added time.

86' - ASEC send on Amara Diaby as they look to pinch the game in the dying minutes.

83' - All to play for in these last few minutes. The Ivorians are starting to push more and more men forward...

80' - GOAL! ASEC 1-1 ZESCO - Jackson Mwanza brings the Zambians level! A scrappy effort after some ping-pong in the ASEC box, but well-take in the end by Mwanza, who continues his fine form.

77' - Both teams have made a substitution, with ASEC sending on Moussa Traore, while Idris Mbombo is on for ZESCO.

75' - GOAL! ASEC 1-0 ZESCO - Nabil Kone beats Banda to a lofted free kick and heads the Ivorians into the lead! A fine finish from the defender, but that was poor goalkeeping from Banda.

72' - Another good cross from the left for ASEC, Bakayoko gets ahead of his marker and puts a header on target, but there's not enough power to trouble Banda.

69' - ZESCO make their first change as Ching'andu makes way for Mwape Mwelwa. The Zambians are just over 20 minutes away from a great result on the road.

65' - Zakri with a sight of goal and a snap shot from the edge of the box, but he drags it wide of Banda's right-hand post.

59' - A fantastic cross from the left flank finds Bakayoko free in the box but he puts his header wide! What a wasted chance...

56' - Sad news for ASEC as young attacker Dao is injured and replaced by Adama Bakayoko. ZESCO nearly claim the lead as Were's shot deflects off a defender but is well saved by goalkeeper Kouakou!

53' - Were with a shot from a tight angle for ZESCO, but he's wide of the near post. That was a wasted opportunity for the Zambians, with the hosts having given the ball away cheaply in their own half.

50' - Much better from ASEC, with Kouame's low cross from the right almost turned home by N'Gouan at the back post, only for ZESCO to make a desperate clearance.

46' - We're back underway in the second half, no changes from either team at the break.

45+1' - Half time - It's 0-0 at the break. ASEC have had the better shots at goal and been more enterprising, but it's ZESCO who will be the more satisfied team in the change rooms.

42' - N’Gouan tries his luck with a long-range, left-footed effort, but the ball skids away from Banda's posts and is no danger to the visitors.

36' - Just about 10 minutes to half time. If ZESCO can keep it goalless, they will definitely be the happier team at the break.

32' - Odhiambo chops down ASEC's Zakri with a crude, late challenge and is deservedly booked. The hosts go on to threaten from the free kick, with Banda looking uncertain when it comes to dead-ball situations.

28' - ASEC tee up Dao for a long-range effort, but the youngster blasts his shot wide of the mark.

23' - Past the midway point of the first half, it's still 0-0 in Abidjan between ASEC and ZESCO.

18' - ZESCO do need to be careful of being drawn forward, with the hosts very possessing some very quick players who could be deadly on the counter attack.

14' - ASEC have been guilty of giving possession away quite cheaply in recent minutes, allowing the Zambians to get a foothold in the game.

9' - Now Banda does make a fine save, tipping a free kick from Daouda over the crossbar! That was a curling effort from about 25 metres out that looked destined for the net...

5' - It's all ASEC early on, with the likes of Zakri and Dao looking dangerous going forward, but ZESCO goalkeeper Banda has yet to make a significant save.

1' - Kick-off - We are underway in Abidjan, ASEC wear their traditional yellow and black, while ZESCO are in green and orange.

17h20 - These teams met 11 days ago in Ndola, with the Zambians claiming an emphatic 3-1 win to see themselves placed second on the log behind leaders Wydad Casablanca. ASEC will be looking for a victory, not just to claim revenge, but also to boost their semifinal hopes.