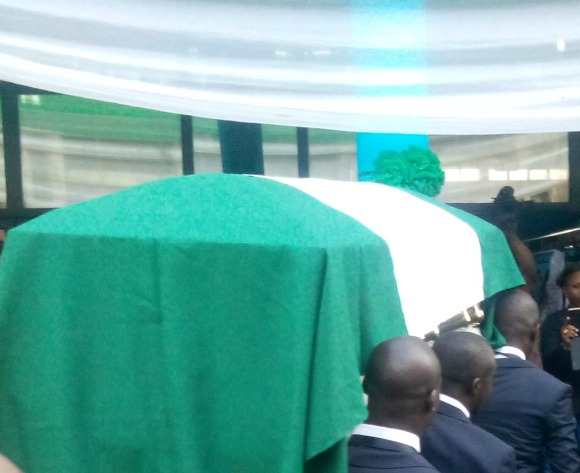 Keshi's coffin at the Ogbemudia Stadium in Benin City on Thursday

Former Eagles stars including Uche Okechukwu, Austin Eguavoen, Victor Ikpeba and Peter Rufaiwere among the players who played in a novelty match when the remains of Stephen Keshi were laid in state at the Samuel Ogbemudia Stadium in Benin City.

Some of the players who eulogised the late coach and player, appealed to management of the country's football to set personal interest aside for the growth of the game.

Ikpeba, who particularly noted that Keshi sacrificed a lot for the growth of football in Nigeria, said crave for personal interest has retarded its growth in the country.

"Keshi had done a lot for the progress and the level the game is in Nigeria,” he saluted.

"He was a great impact in Nigeria football and promoted the sport to its highest level in the country.

"The void left by Keshi will be difficult to fill and I appeal to those managing football in Nigeria to set aside personal interests for the game to grow."

On his part, Uche Okechukwu who said he was still in shock with the demise of Keshi, said he was not happy with development in the game in Nigeria.

He called for concerted efforts to be put up for the country to rediscover its lost glory in the game.

Similarly, Rufai described Keshi as a disciplinarian who will be missed by the fans.