Nigeria legend Keshi laid to rest not as a hero 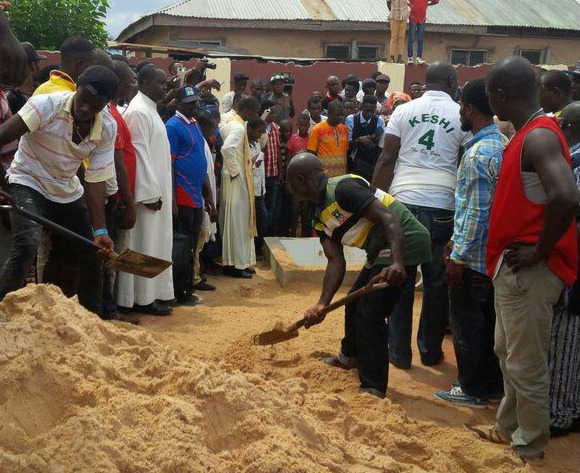 Keshi being buried in his family compound in Illah

Former Nigeria skipper and coach Stephen has been laid to rest in his village of Ilah, southern Nigeria, Friday afternoon, but without the fanfare promised by the country’s government.

However, it was not the state funeral that the Nigerian government first promised with oil-rich Delta State and his family organising his final passage beginning with a number of events on Thursday.

Nigerian sports minister Solomon Dalung said the government chose a low-key funeral because Keshi left behind a family that has to be catered for.

“I am not shocked by the way the government has treated this event,” said a disappointed ex-Nigeria captain and teammate of Keshi, Austin Eguavoen.

“For instance, most of us have yet to get the houses the government promised us when we won the Nations Cup in 1994.

“You are only energised when you have been looked after.

“You now wonder if Nigeria is worth fighting for or even dying for.”

Keshi’s son Femi blasted that the country’s government failed on a promise of a state burial for his father.

“The federal government did not deliver on the promises they made to us as regards our father’s burial,” said Keshi junior.

Keshi made history in 2013, when he became only the second man after Mahmoud El Gohary of Egypt to win the Africa Cup of Nations both as a player and a coach.

‘Big Boss’ will also be remembered as the man who spared off the exodus of Nigerian players to Belgium in the mid-80s when he signed for Anderlecht.