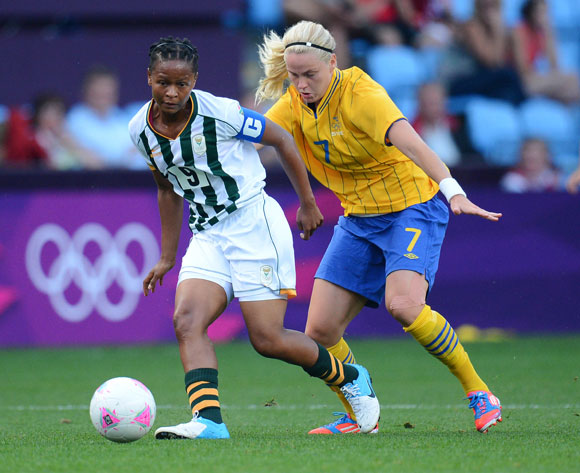 Welcome to AfricanFootball.com's coverage of the 2016 Olympic Games Women's Football Group E match between Sweden and South Africa from the Olympic Stadium in Rio de Janeiro.

This was the first official event in the 2016 Summer Games, and saw Banyana Banyana making their second appearance at the Olympics.

They finished bottom of their group at London 2012, having started their campaign with a 4-1 loss to Sweden. Today gave them an opportunity for revenge and a chance to get Team SA's Olympics off to a winning start.

90+4' - Full time - It ends Sweden 1-0 South Africa. A brave showing from Banyana Banyana, but ultimately they couldn't match their more experienced opponents. They have three days until they face China in their second

89' - Banyana with a half-chance to equalise, but Rubensson defends well against the threat posed by Vilakazi.

86' - South Africa look to hit on a counter attack but Motlhalo  is flagged offside down the left flank.

80' - Ten minutes to play, can Banyana Banyana force their way back into the game?

75' - GOAL! Sweden 1-0 South Africa - Barker makes a mess of dealing with a cross into her box and Nilla Fischer bundles the ball home from close range! A lapse of concentration costs Banyana all their hard work!

71' - A couple of corner kicks for South Africa and Makhabane nearly catches out the goalkeeper with a low cross-shot which just misses the near post!

68' - Past the three-quarter mark of the 90 minutes, Banyana Banyana are closing in on a great result.

65' - Malherbe with a late challenge on Asllani and she's arguably lucky not to be booked.

61' - Past the hour mark, Sweden threaten from a couple of successive corner kicks but SA's defence stands firm.

55' - Rubensson with a shot on goal after great work down the right by Jakobsson, but her effort is half blocked and easily claimed by the goalkeeper.

53' - Swedish substitute Rubensson threatens with a well-struck long-range effort, but it's off target. Schelin then looks to touch home a left-flank cross but can't get it on target at the near post.

47' - A couple of early attempts on goal from Sweden, but nothing Barker can't handle.

46' - Back underway in the second half, Sweden have made a change which sees Elin Rubensson replace Dahlkvist.

43' - SA with their first attack of any real note, but they cannot get a shot away in the penalty area. Goalkeeper Lindahl remains untroubled.

40' - Linda Motlhalo replaces the injured Nongwanya in the first substitution of the match.

37' - Nongwanya's injury is more serious than initially thought, looks like she will have to be replaced. That's a big blow for Banyana Banyana.

34' - Makhabane has been able to continue, but Nongwanya now needs some treatment for a knock to the right foot. She should be okay to play on.

31' - Past the half hour mark, Barker makes a good catch from a Sweden corner kick. Still goalless thus far and it's SA who will be the happier of the two teams as it stands.

29' - Makhabane is stretchered off, Banyana may have to make an early substitution...

27' - A worry here for South Africa after Makhabane stays down with what seems to be a painful knee injury after a collision with Schelin.

23' - Past the midway point of the first half, still goalless in the Olympic Stadium. Banyana have had a few more promising moments in the last few minutes and appear to be growing in confidence.

19' - Goalkeeper Barker makes a mess of dealing with a Swedish free kick, but her defence bails her out with a rushed clearance.

17' - Banyana have seen little of the ball, especially in the last few minutes, and they are relying purely on the hope of some kind of counter attack.

12' - There has been some nice individual play from South Africa, but they can't quite get their passing game going to get a foothold in this encounter.

9' - Sweden have settled into the game really well now and they are pushing Banyana Banyana back deep into their own half.

5' - Schelin threatens to get in behind SA's defence before Jakobsson latches onto the loose ball and almost scores, with her shot coming away off the underside of the crossbar!

4' - Both teams still looking to try and settle into the match. Sweden have had a half chance at goal, but no more than that.

1' - Kick-off - The Olympic Games are officially underway! Sweden wear all yellow, while South Africa are in green and gold.

17h57 - The national anthems are done and we're just a few minutes away from the start of this Group E match.

17h45 - Fifteen minutes to kick-off, here are the starting line-ups...