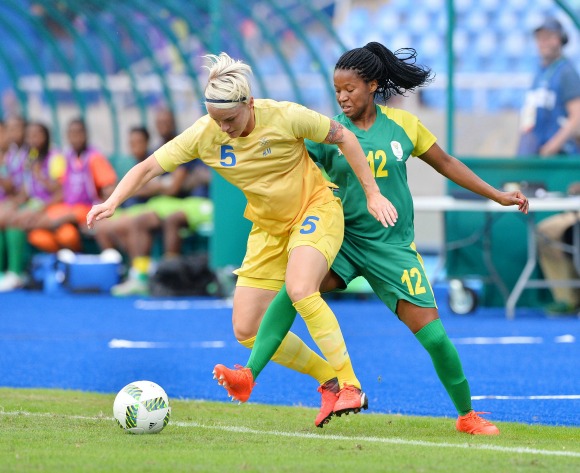 At the first official event of the Summer Games in Brazil, Banyana Banyana put up a brave showing against a far more experienced Swedish team but were ultimately outclassed. Yet it was no disgrace for the South Africans, who lost 4-1 to the same opposition in London four years ago.

After some fine early play from Banyana, Sweden took control of the game and nearly claimed the lead five minutes in when Sofia Jakobsson latched onto a loose ball in the penalty area only to see her shot cannon off the underside of the crossbar.

That was to be the best chance of the first 45 minutes, with the half characterised by Swedish dominance, though they lacked the pace and precision to open up South Africa’s resilient defence.

The Europeans continued to dominate in the early stages of the second half, but once again South Africa grew in confidence and nearly forced a goal against the run of play with just under 20 minutes to play when Mamello Makhabane low, in-swinging cross almost had the beating of goalkeeper Hedvig Lindahl at her near post.

With Banyana looking capable of holding the Swedes, a lapse of concentration from goalkeeper Roxanne Barker cost them dear, as Nilla Fischer was able to force the ball home from close range to finally break the deadlock in the 75th minute.

Fischer’s goal proved to be the difference between the teams, with Sweden running out 1-0 winners to claim the three points on offer. South Africa’s next Group E match will be against China at the Olympic Stadium on August 6.