Bayana Banyana hoping to bounce back against China 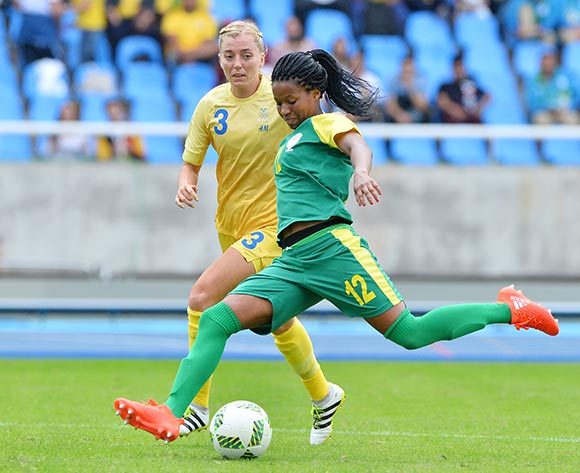 South Africa Women's team Banyana Banyana will be eager to bag a victory when they meet their Chinese counterparts for in a Group E clash at the 2016 Rio Olympics on Saturday night.

Although Vera Pauw's side have started on a low with a 1-0 loss to Sweden, they will now have to go all out to restore their pride.

Despite holding their own against the Swedes, a silly error by goalkeeper Roxanne Barker cost them a point and Banyana Banyana must now show their quality.

Following the loss on Wednesday, the South Africans sit at number three in the group with zero points, but are ahead of China on goal difference.

The Chinese suffered a 3-0 defeat to hosts, Brazil, in their opening fixture.

A win for Banyana Banyana will elevate them to third spot, but that will all depend on the result between Sweden and Brazil three hours later.

Speaking after their loss to Sweden, Pauw said her charges are showing tremendous improvement.

“I told the players at half-time that they were playing too many long balls into the space in the Swedish half,” said Pauw.

“But, when you have a look at where we’ve come from to where we are now, I’m sure you can see the tremendous growth in our football.”

Shifting focus to the Chinese, they are placed at the bottom of the group with zero points and will also want to bag a win against Pauw's side.

Despite their 3-0 loss to the hosts, the Chinese still remain a threat to the South Africans and the match is set to be a thriller.

Should they defeat Banyana, China will move to the third spot with three points and that will boost their chances of a second round qualification.

Coach Bini Bruno will want to see her side display hunger in the match and upset the South Africans to avoid a first round exit.