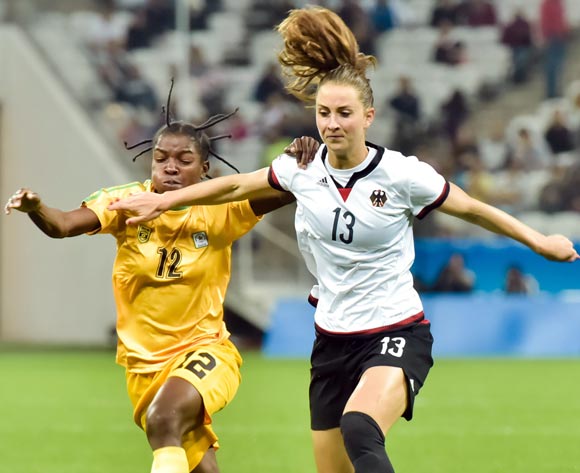 epa05454183 Sara Daebritz (R) of Germany in action against Marjorty Nyaumwe of Zimbabwe during the women's preliminary round match between Zimbabwe and Germany of the Rio 2016 Olympic Games Soccer tournament in Sao Paulo, Brazil, 03 August 2016. EPA/JUCA RODRIGUES/FRAMEPHOTO BRAZIL OUT

Speaking after their 6-1 loss to Germany on Wednesday in their 2016 Rio Olympics opener, Zimbabwe Women's national team coach Shadreck Mlauzi has praised his charges.

The Mighty Warriors are now getting ready for their second match against Canada on Saturday.

Mlauzi told reporters after the match that her side faced a good team and the match was very technical.

"We knew that in this match we had to defend well and we also knew what we were up against," said Mlauzi.

"In the second period, the last 15 minutes, that's when we lost our tactical defensive discipline due to the nature of our physical conditioning.

"Other than that, I think it was a spirited performance in terms of everything a coach would want against former world champions."

They occupy the bottom of Group F with zero points and will go all out to bag the full three points over Canada who beat Australia 2-0.

The match is set to be staged at the Corinthians Arena in Sao Paulo, kicking off at 20:00 CAT.