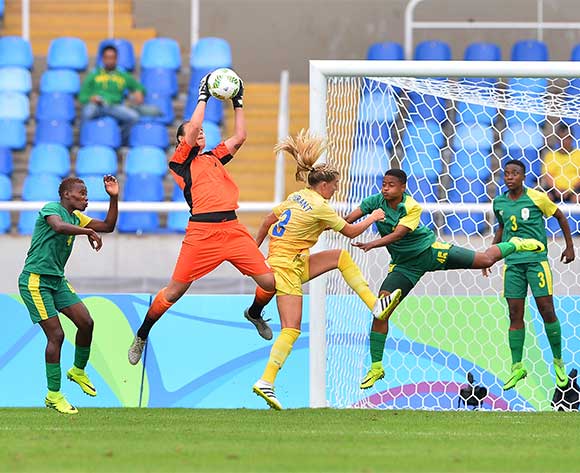 Goals in each half from Gu Yasha and Tan Ruyin handed China’s woman’s team a 2-0 win over South Africa’s woman’s team in a Group E match at the 2016 Olympics on Saturday night at the Estadio Joao Havelange in Rio De Janerio.

The loss is Banyana Banyana’s second of the tournament and sees them placed at the bottom of the group with zero points, and therefore unable to qualify for the knockout stages.

Banyana suffered a 1-0 loss to Sweden in their opening Group E match and were not much better against China.

South Africa held their own for the most part in the opening half, particularly in defence as they thwarted attack after attack from the Chinese.

In attack Banyana’s passing in the final third was poor which resulted in very few decent chances on goal.

The match looked to be heading into the half time break all-square, but a mistake in the final seconds of the half saw the Banyana defence allow Gu Yasha some space inside the box and he duly finished to make it 1-0.

The second half saw China control the possession stakes, but they struggled to break down a well-organised Banyana defence for the most part.

Nonetheless, the Asian team pushed forward and sealed victory with their second goal in the 87th minute courtesy of Tan Ruyin, 2-0.

The loss leaves Banyana at the bottom of Group E with zero points behind Sweden who have three points, China in second also with three points while Brazil top the standings with six points.

Banyana are next in action on 10 August against Brazil in their last group game where they will look to restore some pride.