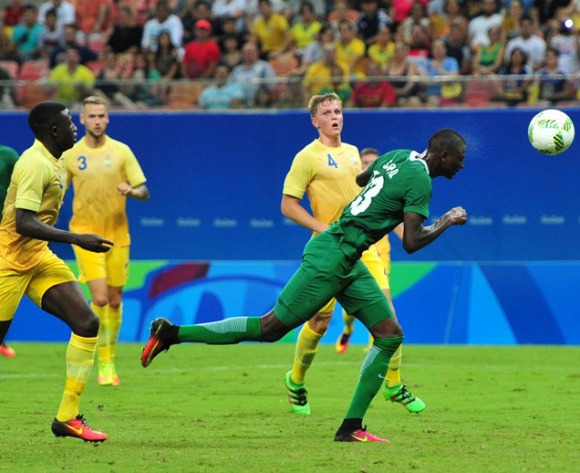 A first half goal by Sadiq Umar has propelled Nigeria through to the quarterfinals of the Rio Olympics after they defeated Sweden 1-0 for their second win in Group B early Monday morning in Manaus.

They now have the maximum six points from two matches, while Sweden remain on a point from the 2-2 draw with Colombia on the opening day of action.

On Wednesday, they face Colombia in their final group game in Sao Paulo, while Sweden take on Japan in Salvador.

Dream Team VI deserved their victory and they could even have won by  a bigger score but for a series of top-notch saves by Sweden goalkeeper Andreas Linde.

Roma striker Sadiq Umar dived to head a super cross from the left by Stanley Amuzie past the goalkeeper in the 39th minute for his second goal of the campaign.

In this match between continental champions, the African champions were the brighter of the two, creating most of the chances and enjoying more of the ball.

European champions Sweden were happier to stay back in their own half and launch the occasional counters. They hardly troubled a defence ably marshaled by William Troost-Ekong.

In the first half, four-goal hero Oghenekaro Etebo against Japan and Sadiq were at the end of most of Nigeria’s chances but the Sweden goalkeeper Linde pulled off some big saves.

Sadiq was first denied by the Sweden goalie after just 10 minutes when he went clean on goal.

Sweden’s only opening chance in the first half was in the 23rd minute, but Mikael Ishak sliced  the half chance off target.

In the 48th minute, goalkeeper Linde flung himself to keep out a goal-bound shot by skipper Mikel Obi.

But as the game wore on, Sweden began to push forward in search of an equalizing goal.

Ishak again was involved in a good chance for Sweden in the 75th minute, but his half volley was far off the mark.

Twice Sadiq failed to connect dangerous crosses into the Sweden box and Etebo was denied his fifth goal of the tournament in the 76th minute by the goalkeepr, before the Sweden skipper Astrit Ajdarevic carved out his team’s biggest chance a minute to full time only for Sincere Seth to somehow block it for a corner.

This Dream Team, against all odds, looks the likeliest candidate for gold. Yep, you saw it her first! Funny that some ESPN pundits predicted their exit in the group stages.