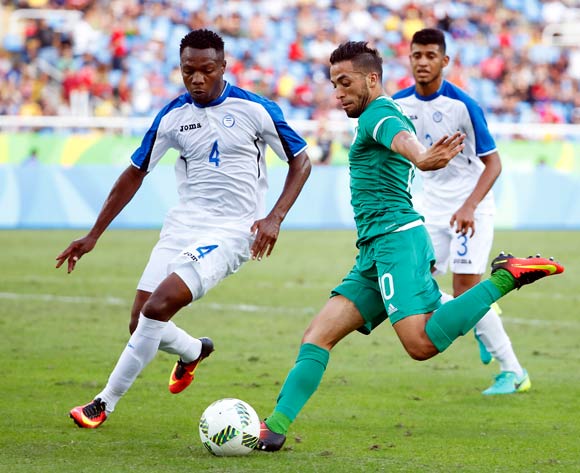 Abderrahmane Meziane (C) of Algeria in action against Kevin Alvarez (L) of Honduras during the men's group D preliminary round match of the Rio 2016 Olympic Games Soccer tournament between Honduras and Algeria at the Olympic Stadium in Rio de Janeiro, Brazil, 04 August 2016. Honduras won 3-2. EPA/DIEGO AZUBEL

Good evening and welcome to AfricanFootball's live coverage of the 2016 Olympic Games Men's Football clash between Algeria and Portugal from the Estádio Governador Magalhães Pinto in Belo Horizonte.

80' - Ten minutes remaining and Algeria will bow out of the competition; unable to replicate what their predecessors achieved in 1980.

71' - Portugal have already made their full compliment of subs; clearly one eye on the quarterfinals.

60' - Hour played and no change to the half-time scoreline; still deadlocked at 1-1

30' - GOAL! Mohamed Benkablia levels matter in Belo Horizonte - excellent goal by the Algerian forward, shows excellent close control before curling the ball into the back of the net.

10' - Portugal bossing possession in the opening exchanges with Algeria chasing shadows. The Africans have only pride to play for with two defeats from their opening two games resulting in their elimination from the football tournament - Portugal are set to advance as Group D winners having trumped both Argentina and Honduras.