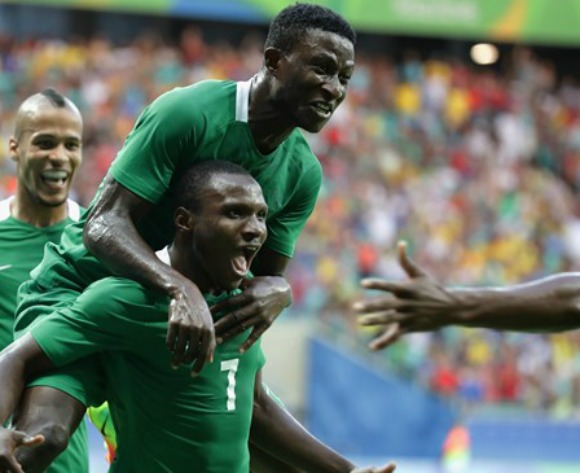 AfricanFootball.com can exclusively reveal that Nigeria Olympic team, who only this past week embarked on a pay strike, will now be entitled to a bumper bonus payout of as much as $6,000-a-man after they reached the medal bracket at the Rio Olympics.

Before hitting the Olympics semi-finals, the team were only entitled to a daily camp allowance of $150-a-player and they have so far been paid for 22 days.

A top team official told only AfricanFootball.com: ”The fortunes of Siasia’s team have improved remarkably since their qualification for the semi-finals. Now that they could medal in Brazil, they could pocket as much as $6,000 or even more by winning their next two matches.

“The Nigeria Football Federation (NFF) pay bonuses on a match-by-match basis, but with the sports ministry it is only when you are within winning a medal that you will paid a bonus.

“That was the case at the All Africa Games in Congo Brazzaville last year, when the players received $3,000-a-man as bonus for clinching bronze.”

This bumper payout is most certainly a sharp departure for a few days ago when Chelsea star Mikel Obi had to again bail out the team in Sao Paulo and the players stayed away from training so as to protest that they are yet to receive the full payment of their allowances.

Nigeria defeated Denmark 2-0 to set up a semi-final showdown against rampant Germany on Wednesday night in Sao Paulo.