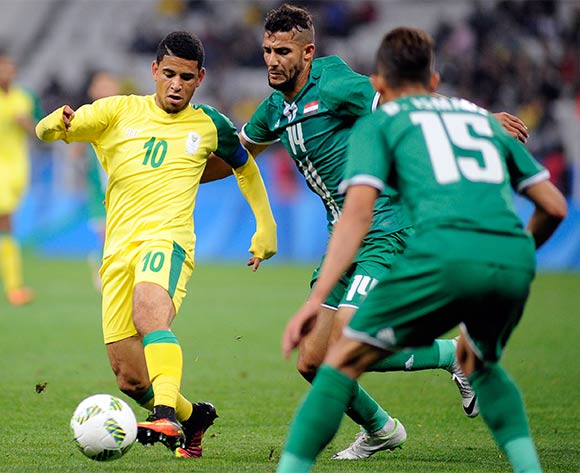 epa05472795 South Africa's Keagan Dolly (L) in action against Natiq Suad of Iraq during the preliminary round match between South Africa and Iraq for the Rio 2016 Olympic Games soccer tournament, in Sao Paulo, Brazil, 10 August 2016. EPA/ALAN MORICI/FRAMEPHOTO BRAZIL OUT

Mamelodi Sundowns have suffered a major injury blow ahead of their trip to Port Harcourt for their 2016 Caf Champions League group stage clash against Enyimba next Tuesday.

MATHOHO BLOW FOR KAIZER CHIEFS, ABRAW OUT FOR NINE MONTHS

The club announced via their official website that they are sweating over the fitness of Keagan Dolly, with the former Ajax Cape Town winger having injured his hamstring while on international duty at the 2016 Rio Olympic Games.

In a statement released on the club's official website; Sundowns blame 'over-loading' for the reason behind his injury:

"The Brazilians’ medical team attribute the hamstring injury to overloading matches in quick succession, especially for a player who has played more matches than any Sundowns player.

"The SA under-23 Captain played a crucial role in Sundowns’ CAF Champions League victory over Zamalek on a Wednesday, then quickly flew to Brazil, where he played a full 90 minutes in a friendly match against a Brazilian police team with hardly five hours of rest.

"The Sundowns team doctors believe that Dolly, who did not travel with his teammates to Rustenburg for the pre-season camp might be out of both the Champions League match against Enyimba and the MTN8 match against Supersport United.

"Before South Africa’s opening match against Brazil, it was well reported that Dolly’s fellow under-23 teammates; Tashreeq Morris, Mothibi Mvala, Thabiso Kutumela and Phumlani Ntshangase were suffering the same injury. Abbubaker Mobara also suffered a hamstring injury in the match against Iraq."

Sundowns have already qualified for the semifinals of the 2016 Caf Champions League as Group B winners.

Pitso Mosimane's men travel to Nigeria on Saturday, before returning home ahead of their MTN8 quarterfinal clash against Tshwane rivals SuperSport United a few days later.