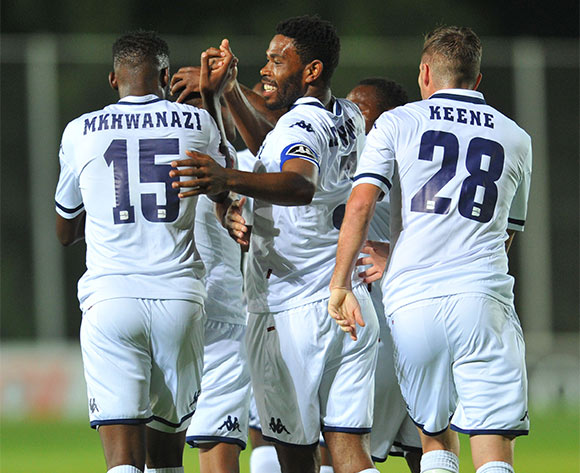 Thulani Hlatshwayo of Bidvest Wits celebrates his goal with hia teammates during the Absa Premiership match between Bidvest Wits and Black Aces at the Bidvest Stadium in Johannesburg, South Africa on January 15, 2016 ©Samuel Shivambu/BackpagePix

Bidvest Wits skipper Thulani Hlatshwayo says he is 100% ready to get rolling in the 2016/17 Premier Soccer League.

Known as 'Tyson', the former Ajax Cape Town defender was speaking exclusively to AfricanFootball.com during their new kit launch at Woodmead, Johannesburg on Tuesday.

The central defender praised their new kit designed by Kappa, saying it will help them to intimidate their opponents in the new campaign.

“It's a good jersey and it feels comfortable. It reminds me of the Ivory Coast shirt which reveals the physique of the players,” said Tyson.

“I think as a team we are physical side and we will intimidate our opponent. You can feel it when you're running that it will enhance our performance.”

Hlatshwayo tells this website that their mission is to take each and every game as it comes.

MATHOHO BLOW FOR KAIZER CHIEFS, ABRAW OUT FOR NINE MONTHS

“We juts have to continue with our strategy of taking it one game at a time. It's going to be an interesting season for the supporters, and everyone associated with the game. Teams will come out guns blazing to challenge for trophies,” adds Hlatshwayo.

“We're looking forward to it and we want to be on top of the table when the second round starts, that's when the league starts to become tough.

“We are gelling together as a team now and by the second round we have to be on top and ensure we don't drop points.

“Coach Gavin (Hunt) is a coach who wants results. We went to Cape Town for our pre-season, we are 100% ready as a team and we are looking forward to facing Kaizer Chiefs in the league opener.

“We know their strengths and weaknesses, but it's going to be a test for us. They have good individuals and we will just ensure our game plan will be proper on the day.

“We finished at number two last season, they were behind us (number four) and we just have to continue where we left off last season.”

The Clever Boys are set to meet Steve Komphela's men in the league on Tuesday, 23 August at Bidvest Stadium at 19:30.