Buhle Mkhwanazi: Malajila and Ngele will help us 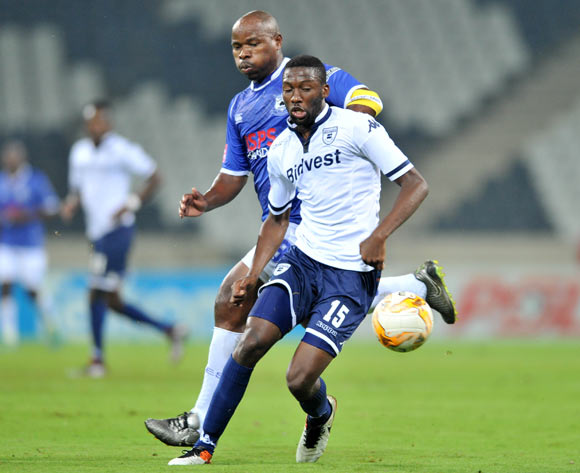 Buhle Mkhwanazi of Bidvest Wits challenged by Collins Mbesuma of Black Aces during the Absa Premiership match between Black Aces and Bidvest Wits at the Mbombela Stadium in Nelspruit, South Africa on May 03, 2016 ©Samuel Shivambu/BackpagePix

Bidvest Wits defender Buhle Mkhwanazi believes the arrival of Mogakolodi Ngele and Cuthbert Malajila from Mamelodi Sundowns will help them challenge for trophies.

The Bafana Bafana defender has praised the duo's arrival from the Brazilians following a swap deal which saw Wits losing Sibusiso Vilakazi to the Tshwane side.

'Brizzo' was speaking to AfricanFootball.com during the Clever Boys' new 2016/17 Kappa kit launch at Woodmead, Johannesburg on Tuesday.

The former University of Pretoria and the Sundowns centre back said their pre-season went well in Stellenbosch, Cape Town and insists they will do better.

“I think the jersey is much better than the last season's one. The quality and the feel of it is different. It makes it difficult for an opponent to pull or grab you,” said Mkhwanazi.

MTN JOINS FORCES WITH THE PSL FOR ANOTHER FIVE YEARS

“It has an aircon feel and the design is brilliant for me...you don't really need an under garment - I love it.”

Speaking about their campaign where they start against Kaizer Chiefs in the Absa Premiership at home, the 26-year-old adds that 'Mala' and 'Tsotso' will be vital for the side.

“I think we will have a better season and improve on what we achieved last season," adds Mkhwanazi. "If you check, in the past two seasons, we have have been building very well and gradually doing well as a team,”

“I think this year's additions will help us challenge for trophies in the next campaign, the likes of Mogakolodi and Cuthbert, they have won some trophies you know.

“They have the experience and we need to help them to gel in the team so that we can see their input and their quality. They are dangerous in front of goals.

“It was a good pre-season, it is what players don't like the most but it's an opportunity for players to bond apart from working hard.

“It was okay for us and we enjoyed it. I'm hoping it will pay off and we start well in our matches.”

Gavin Hunt''s men resume their 2016/17 campaign against Amakhosi in the league at home, Bidvest Stadium, on Tuesday 23 August at 19:30.

Three days later, they host another Soweto giant, Orlando Pirates in the MTN8 Cup quarter-final on Saturday 27 August at 20:15.