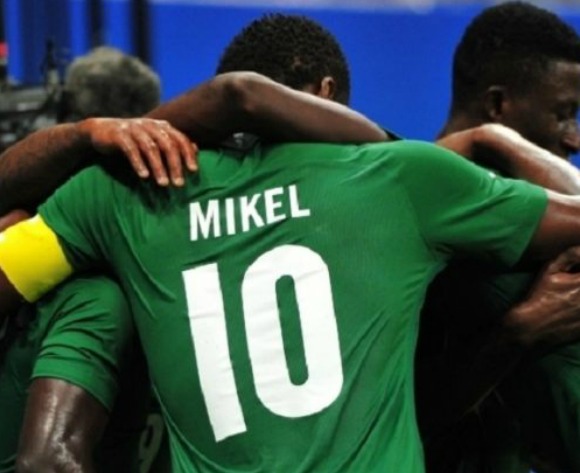 END OF THE GAME! Nigeria win and clinch the bronze medal. It's the only medal for Nigeria at the entire Rio Olympics

90+3 There will be three minutes of additional time now

86 GOAL! Honduras pull another goal back with a free header through Marcelo Perriera, just when you though this game was won and lost

80 Nigeria change - Kingsley Madu in for Imoh Ezekiel. Siasia wants to shut up shop for the bronze medal now

75 - Sincere is booked for a late charge on Elis, free kick to Honduras in a  very good position

71 - GOAL! Anthony Lozano pulls a goal back for Honduras and it is now Nigeria 3 Honduras 1. It's the simplest of headers from inside the box

64 - Nigeria resort to shooting practice now, Amuzie crashes his shot against the sidenetting

61 - An hour played and it remains Nigeria 3 Honduras 0. It looks like this game has already been won and lost with still half an hour to play

56 - GOAL! Sadiq Umar nets his fourth goal of the competition. He was composed inside the box before he rifled home off an assist by Mikel for Nigeria's third goal of the day

49 - GOAL! Aminu doubles Nigeria lead after the Honduras goalkeeper could barely stop a shot by Mikel from the top of the box

End of first half - Nigeria 1 Honduras 0

45+3 - Elis header from right inside the box hits the side netting. Honduras biggest chance of the first half

36 - At the other end of the pitch, Elis has threatened the Nigeria goal but still no end product to show for all the counters

34 - Nigeria finally take the lead through Sadiq Umar, who tapped home from the far post. It was long in coming

30 -Half an hour played and Honduras have so far defended well, while also pushing forward occasionally

25 - Imoh Ezekiel comes close for Nigeria, but his final shot misses the mark. A big chance for NIgeria which went abegging

21 - Still very much a scrappy affair

7 - Aminu's shot crashes against the Honduras post but it does not hit the back of the net and moments later, Imoh Ezekiel goes down inside the box but the ref will have nothing to do with this

5 - Troost-Ekong does well in Nigeria defence to stop an ambitious thrust by Honduras, he concedes the corner but nothing comes out of it for the central Americans

4 - Nigeria are already bossing the possession

1 - Nigeria take the kick-off and attack right away

Nigeria fell to Germany 2-0 in the semi-final, while Honduras were thrashed 6-0 by hosts Brazil.

Welcome to the AfricanFootball.com LIVE commentary of the Rio Olympics losers' final between Nigeria and Honduras for the bronze medal.