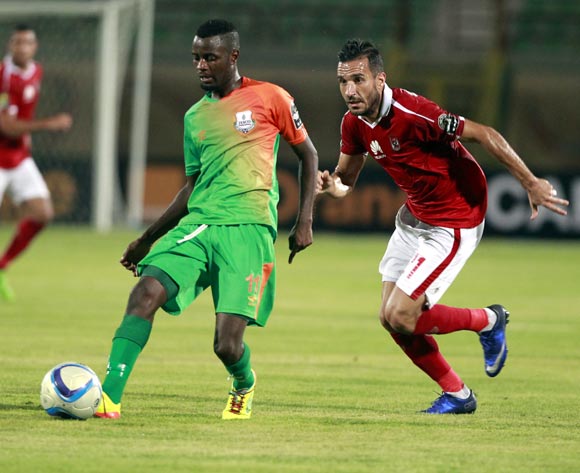 Good afternoon and welcome to our live coverage of the 2016 CAF Champions League clash between Zesco United and Wydad Casablanca from the Levy Mwanawasa Stadium in Ndola.

90+1' - CHANCE! Golden chance for Fabrice N'Guessi to win it for Wydad, but he fails to hit the target from close range.

85' - Save! Chance at either end of the pitch; first Lazarous Kambole forces Akid into an easy save before Ismail Hadda's left-footed strike troubles Banda - the Zambian stopper with an acrobatic save.

83' - Corner-kick for Zesco comes to nothing as the hosts press for the winner. Wydad holding on for the time being.

80' - Into the final 10 minutes of the clash and both teams going all out for the victory now, players streaming forward in search of the winner.

70' - Into the final 20 minutes of the clash. Both teams happy to sit back and hit the other on the counter-attack.

65' - Wholesale challenge made by either coach in the space of a few minutes as we enter the final exchanges of the clash. Deadlocked at 1-1 - as it stands Wydad will advance as Group A winners.

56' - GOAL!  With no one closing him down, Chikatara let's fly from range with the ball finding the back of the net via the inside of the post. Banda stunned.

54' - CHANCE! Ball falls for Abdeladim Khadrouf on the edge of the area, but with no one near him the Wydad midfielder can only succeed in guiding his effort wide.

48' -  Reda Hajhouj introduced by John Toshack as the visitors go in search of the equaliser.

46' - Second-half as kicked off in Ndola

45'- Two minutes added to the half

42' - Corner-kick fired in by Zesco United, ball bounces in the direction of Were but he is late to react - Zesco creating chance after chance in Ndola.

20'- CHANCE! Were should of made it 2-0 with the goalkeeper stranded, but he can only succeed in firing his effort high and wide.

17' - GOAL! Owino Odhiambo heads home from the resulting corner-kick. 1-0 to the hosts.

16' - SAVE! CLEARANCE OFF THE LINE! Were denied from point-blank range before Mwelwa's follow up shot is cleared off the line, corner-kick.

12' CHANCE! Banda spills a cross, but does well to grab the ball at the second bite of the cherry with Chikatara lurking.

10' - Free-kick for Zesco United. Saidi fouls Were; the Kenyan tries his luck but his effort hits the wall and Wydad clear from danger.

9'- Good passage of play by Zesco ends with Akid making an easy save from a Mwanza cross.

5'- Just a reminder that the winner of today's game will face Zamalek in the semifinals of the African showpiece, the loser will face Group B winners Mamelodi Sundowns. A draw will be enough for Wydad Casablanca to finish atop Group A - the Moroccans are two points clear of Zesco with both teams having already booked their place in the final four.