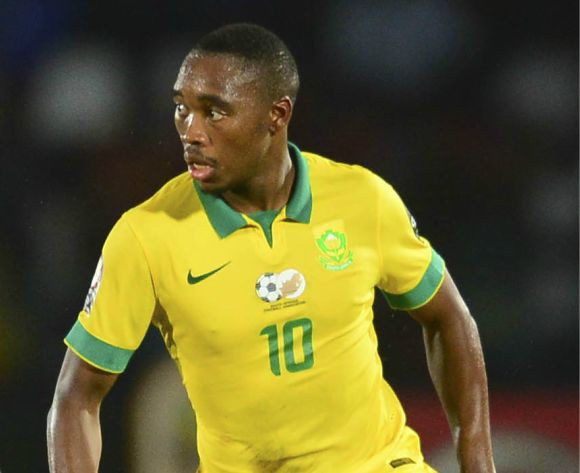 Good evening and welcome to our live coverage of the 2017 African Cup of Nations qualifier between South Africa and Mauritania from the Mbombela Stadium in Nelspruit.

85' - CHANCE! Hlatshwayo flashes his header wide...now Boubacar is on the floor.

80' - Into the final 10 minutes, Mauritania holding firm despite playing with 10-men.

78' - Yellow card - Furman; game heating up in the final exchanges with South Africa chasing the winning goal, Mauritania happy to slow the game down.

75' - Red card - Diakhite reduced to 10-men; silly foul by the forward and he receives his marching orders.

70' - CHANCE! Great defending by Camara to deny Rantie from close range - the Mauritanian defender quick to the ball after Vilakazi beat the offside trap.

66' - Easy take for Boubacar from a Makola free-kick. South Africa have introduced Tokelo Rantie as they go in search of the winner. Furman also about to come on.

56' - PENALTY MISS! Gabuza misses from 12 yards after Wade was adjudged to have handled the ball inside the area.

52' - Kekana puts the ball into the back of the net, but he was in an offside position.

50' - CHANCE! Ball floated into the area, but somehow both Vilakazi and Gabuza miss the ball. South Africa eager to test 18-year-old Boubacar.

45+2' - CHANCE! Ball falls favourable for Gabuza who gets on the end of the ball, but Souleymane is quick off his line to clear from danger - the goalkeeper looks to have hurt himself and will be a doubt to resume the game.

35' - Kekana lets fly from range, but the ball was always sailing over - to the relief of Souleymane who would have surely watched the Sundowns skipper bang in arguably the goal of the qualifiers away to Cameroon.

30' - Half-hour played in Nelspruit, South Africa finding their rhythm as they go in search of the lead before the half-time break.

26' - GOAL! From the resulting corner-kick, Kekana nods home from close range with the goalkeeper slow to get off his line.

25' - SAVE! Space opens up for Makola who shifts the ball onto his left-foot, but Souleymane is up to the task - makes a good save.

22' - Bafana Bafana bossing position at the moment, but with little avail. Mauritania very disciplined in defence.

17' - GOAL! Guideye opens the scoring for Muaritania, 1-0 - swift counter-attack ends with the midfielder guiding the ball in the back of the net from the edge of the area.

11' - Mobara surges down the right flank and tries to pick out Gabuza, but Sally is well positioned to clear from danger. Resulting corner-kick comes to nothing with Hlatshwayo guilty of committing a foul.

8' - CHANCE! Ball falls to Mpho Makola at the far post from a Langerman cross, but Mauritania do well to clear their lines.

5' - Early set-piece for Bafana Bafana comes to nothing as Langerman gives commits a foul on the far side of the park.

- Players are out on the park, kick-off imminent.

- Mauritania missing a few key players, but are still expected to give South Africa a tough time in the Mpumalanga province.