Nigeria vs Tanzania: 10 Things We Learnt 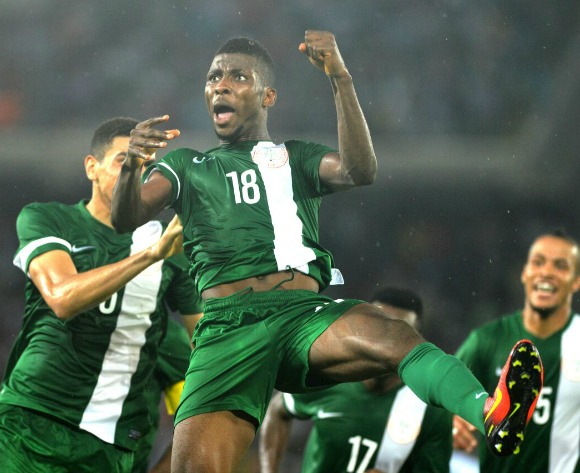 Here are 10 things we learnt…

1.’NACHO: PEP SHOULD TAKE A CUE FROM ROHR

Did Pep Guardiola actually watch the game? If he did, it’s important he notes Iheanacho’s best position.

In ‘Nacho, we are about to have the same problem we had with Mikel.

‘Nacho came to the fore at the U17 World Cup as a number 10, but he is being listed as a striker at City, now seen as a back-up to Sergio Aguero.

Mikel hit limelight as a playmaker at U20 WYC in 2005 where he emerged second best player, but at Chelsea, he was converted to a holding midfielder. The boy has not come out of that ‘confusion’ since then.

In the national team, we see ‘Nacho as a number 10, but City see him as a number 9. Against Tanzania, the boy excelled in the number 10 role.

Pep should note that ‘Nacho is more potent when he pops up from behind. Even as a number 9, he fancies being a ‘False 9’, something that should please Pep.

‘Nacho could still be our next Jay Jay. We have to force this one through.

It won’t be a bad idea if Rohr has a meeting with Pep. We need to avoid a repeat of the Mikel episode.

2. CAN IGHALO ACTUALLY FIRE US TO GLORY?

Not a few have questioned Odion Ighalo’s ability to be the focal point of Eagles attack. He has not been potent in national colours and Saturday was one of those days.

At Watford, he thrives in a 4-4-2 formation with Troy Deneey serving as the foil in attack.

In one of those post match interviews, he had handed over his man of the match award to Deneey and the latter joked; “this is the only pass I have received from him all day”. Deneey inferred that he had served as assist for Ighalo’s goals in the game without getting any pass in return.

To get the best out of Ighalo, perhaps, the national team should resort to a 4-4-2 that could see Brown Ideye, for instance, be the desired foil.

Otherwise, there are huge doubts over Ighalo’s ability to lead the line in the national team.

3. YES, THE ATTACK IS EAGLES STRENGTH!

Every team play to their strengths. The Nigerian team at the moment has an embarrassment of attacking talents. It must be noted that this team was without Isaac Success, Oghenekaro Etebo and Alex Iwobi. When all the players are available, the coach would have problems making his choice.

But he could actually unleash all at an opposition, of course, with some on the bench. Rohr’s ability to manage these attacking resources will say a lot about his competence.

Barcelona, for instance, thrives on the attacking trio of Lionel Messi, Neymar and Luis Suarez. This offensive disposition incidentally, takes the pressure off the defence.

If we are not scoring more goals with this avalanche of offensive players, the coaches have questions to answer.

4.WE AREN’T REALLY THAT BAD

Failure to make consecutive AFCONs creates the impression that we don’t have gifted players anymore. But that’s wrong.

Player for player, the Super Eagles can still match any team on the continent, at least, on paper.

I looked at Eagles team list and I was impressed with the quality and current ratings of the players on parade. They are all playing top flight football and regularly too.

I saw Cote d’Ivoire’s team sheet in a crucial game against Sierra Leone later and save for Man U’s Eric Baily, there was no player whose club status could instill awe. On paper, the Eagles paraded against Tanzania were more solid than the Elephants who laboured to a 1-1 draw at home to Sierra Leone.

Tell me, which team on the continent will see a list that has Mikel, Iheanacho, Ighalo, Moses, Musa and (potentially) Iwobi without taking some caution?

We are where we are today because previous national team coaches have failed to properly deploy the resources within our disposal.

One coach once told us Iheanacho was too young to play for the national team; another gave a shirt to a non-league player at the expense of players both in the domestic and foreign leagues.

In recent times, sentiments and relationships have dictated selections into our national teams.

Looking at Eagles team list against Tanzania, one is left wondering how this crop of players will miss back-to-back AFCONs.

But this is a case of a house wife who has all the ingredients needed to prepare a delicious meal, but she simply doesn’t know how to cook.

Victor Moses had arguably his worst outing in national colours.

He could so easily have had a hat-trick in the first half. After one of those misses, Ighalo held him by the shoulder, obviously telling him to take it easy.

The goal he scored for Chelsea last week was more difficult than most of the ones he fluffed away against Tanzania.

The boy has been away from the national team for a while. He needs to get used to wearing the green and white colours again. Perhaps, the likes of Ighalo will help.

7. SERIOUSLY, ONAZI NEEDS TO SIT UP

Ogenyi Onazi’s performance in the national team has been on the decline in recent times.

He was caught in possession a few times and there were also a couple of misplaced passes. If you get away with such against Tanzania, you may not be that lucky against a more solid opposition.

Come to think of it, he should be bothered by Azubuike Okechukwu’s performance besides Mikel at the Olympics.

If Azubuike’s emergence doesn’t make Onazi sit up, I don’t know what else would. He might be toying with his regular starting berth more so, when there is a new coach at the helm who may not have recourse to past reputation.

I read somewhere last week about Kenneth Omeruo hoping to link up with Williams Troost-Ekong at the heart of Eagles defence. Hmmmm…he might need to work extra hard to upstage the Balogun/Troost-Ekong combo at the moment.

Haugesund of Norway captain Troost-Ekong showed his current form at the Olympics. Right now, it is a case of who will slot in beside him and Balogun was a rock against Tanzania. That last ditch tackle from behind when the striker was about to pull the trigger was commendable.

And the fact that he did that without giving away a penalty drew deafening applause from the crowd. Little wonder, he has been a regular for Mainz in the Bundesliga.

Have we found the ideal central defence partnership in the national team at last?

Rohr seems to have been largely influenced by what he saw at the Olympics. Some of us feel Mikel is better suited to a holding midfield role akin to what he does at Chelsea or at best, a deep playmaking role, that is, the Pirlo role.

But in this game, he filed out in the hole behind the strikers just as he did at the Olympics. He seems to be enjoying this role in the national team; this is close to the Mikel we saw at the WYC 2005.

But this was Tanzania. If Rohr desires Mikel to thrive in this role against a bigger opposition, the personnel around him have to be right. At the Olympics, Samson Siasia got Azubuike and Usman Mohammed do the dirty work for him and offer more protection to the defence.

But I’m not a fan of Mikel as a playmaker in the national team. He should be the more advanced holding midfielder in a twin defensive midfield position.

10. THIS TEAM CAN GET THE WORLD CUP TICKET IF…

Considering the current form of our players in their clubs juxtaposed with the players our World Cup qualifying oppositions will parade, there is no reason to be less confident.

This quality of players can still get us a World Cup ticket against Algeria, Cameroun and Zambia. But the onus is on the new technical crew.

The 1-0 scoreline did not reflect the flow of the game. There are many players in this team who can weigh in with the goals. The ‘low-scoring’ tag on this team is not befitting.

The biggest task facing Rohr is to harvest the goals buried in this team. If he eschews sentiments and plays up merit in his team selections, he will navigate this team out of the doldrums.

Mr. Clement, you have seen you getting good praises all over. I absolute believe you wrote a VERY good and constructive article!!!! Keep it up!! My personal option are - Mikel should remain upfront, reason is because he sees what others doesn't see in a game. There is no African player that have this quality. That's how Jose Mouriho describe him. You can have a bunch of attacking players, but when you don't have a player who provides what you call the KILLER pass in Nigeria. In Europe, the coaches call it the LAST pass, then it's difficult to build up a 100% scoring changes. E.g. Olympic U23, Iheanacho has it but not as strong as Mikel. - We should not play Ighalo ANYMORE if we stick to the current formation. As a typical number 9, you should be able to hold the ball from the air control down and lay a pass to your mid-field player, to rebuild the attack. He is not able to do that. Regardless of the situation or how strong the defender is. Emenike, Iheanacho, Ideye Brown, Drogba, Pelle Graziano(Italy) from the recent Euro_2016 all have this quality. I already saw the problem when we played against Egypt in Kuduna. He had a very strong Egyptian defender who was always anticipating the passes more better. Through out the game both 1st and 2nd leg, he had no remedy. - Onazi should be DROP! At least for the next game!! Sorry... you can't perform like that...especially when you know that there are lots of players waiting to take your place. Ndidi and Azubike should be given a chance to play. Both are very intelligent players. - In my opinion, I don't think Moses was having a worst outing. He did a lot of penetrations. He was unlucky and 50%of the missing chances was because of the very bad pitch!! I know most of you will not agree with me on this one. But you should look very deeply at the missing chances (youtube) A typical example , 1st half, was when he played the ball wide over the goal post. The ball bounces just before hitting it. It's due to roughness and hardness of the grass. Trust me guys, I live in front of a football field in Europe. The grass needed to be cut again in the morning and wet it a bit to provide the softness. Most of our player had the same issue in Kaduna when we played Egypt. Balogun had also issues when moving forward. I think I will stop here for now. You (Mr.Clement) said most of it. Looking forward to another POSITIVE constructive article from you.