Ighalo will grab China cash after 'unfinished business' in England 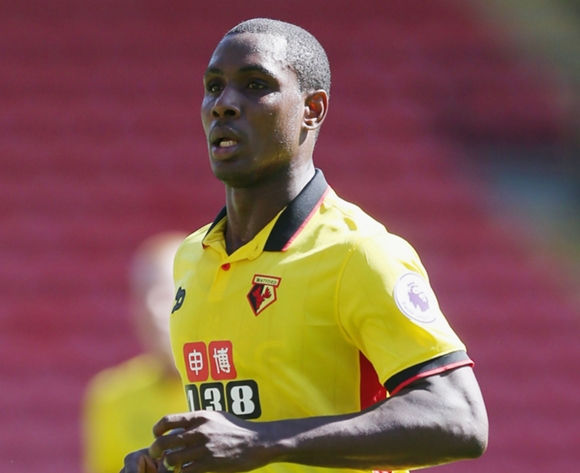 Nigeria striker Odion Ighalo has said he hopes to cash in on a big-money move to China, but for the time being he has unfinished business in England.

Watford star Ighalo has twice rejected a bumper pay day to play in China with the last being a 38 million pounds bid from Shanghai SIPG.

Last season, the 27-year-old Nigeria striker stormed the Premier League by firing 15 goals in 37 appearances and he only recently prolonged his contract at Watford till 2021.

He said when the time comes, he will be ready to take the fortune promised by a Chinese club.

“I’m not moved by the money from China. When the time comes, I will go to China,” Ighalo told AfricanFootball.com

“This is not the time to go to go to China. The money is big, the money is crazy, I know.

“And I am not Cristiano Ronaldo, I’m not Messi. I’m not rich, but I’m contented with what I have, I thank God for what I have.

“Week in, week out, my mum and my siblings watch me in action in the best league in the world.

“This is the best league in the world and I hope to keep giving my best every week there.

“And so, I still have unfinished business in England.”

This season he has yet to get his name on the scoreboard in the Premier League, but he insisted the goals will still flow.

“Three games and no goal, I am not bothered because I will go step by step and I know the goals will soon start flowing again,” Ighalo said.

“Now in the Premier League, it’s more difficult because they know me very well and so every defender wants to mark me so hard, more than what they did last season.”