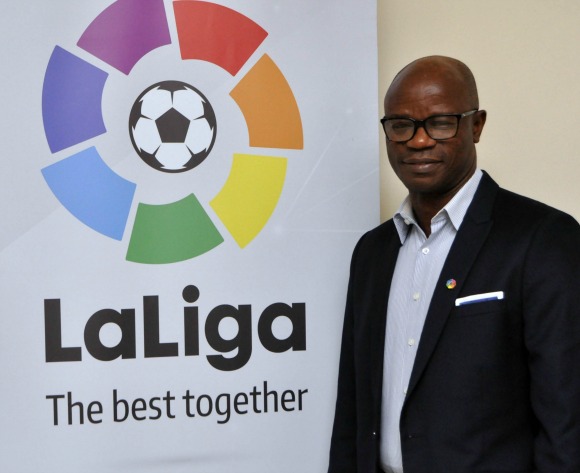 One of the world’s most successful leagues, La Liga, has thrown its doors wide open to Nigeria with ex-World Cup star Mutiu Adepoju tasked with installing the Spanish top flight league as No.1 in this football-mad country.

Already, a five-year co-operation with the Nigeria league has seen an All-Stars team feature on a playing tour of Spain during which they lost all three matches to Valencia, Malaga and Atletico Madrid last month.

La Liga will soon donate 4,000 footballs to the country, while coaches from Spain are scheduled to visit to educate their counterparts in schools and academies in Nigeria.

An Under-13 tournament, La Liga Promesa, will be staged in Nigeria and so too South Africa.

La Liga Foundation has also made a cash donation to assist Nigeria premier league club El Kanemi Warriors and Internally Displaced People (IDPs) as a result of the havoc in northeast Nigeria caused by the terrorists’ organisation Boko Haram.

Catalan giants FC Barcelona are also in the process of setting up a residential academy in Nigeria’s commercial capital city of Lagos.

La Liga country manager for Nigeria Mutiu, 45, spent more than a decade in the Spanish top-flight league, playing for the likes of Racing Santander and Real Sociedad.

“La Liga is opening to the world,” said the one-time midfielder, who has been well prepared for his latest post after heading one of Nigeria’s top club Shooting Stars and working with Kwara Football Academy.

“It already has its offices in the United States of America, Dubai, China and Japan.

“And the plan is to soon open five offices in Africa. The first two, in South Africa and Nigeria, are already functioning.

”We will be the best together.”

The recent trip to Spain of both players and managers of Nigerian clubs was a major step to make La Liga No.1 in the country, according to Mutiu.

“Within a few months of this agreement, La Liga has taken a team from here to Spain, where there was also a workshop for Nigerian club managers on organisation and marketing to make our clubs more viable,” he said.

“We may have lost all three matches, but we took some positives from this tour as it was a massive exposure for all stakeholders – players and club officials.

“We want to open the door of La Liga to Nigerian players.”

But unlike the Mutiu generation which boasted the likes of Peter Rufai, Finidi George, Wilfred Agbonavbare and Christopher Ohenhen in La Liga, young defender Uche Agbo of Granada CF is now the only Nigeria star playing regularly there.

“The EPL has the edge right now, but we want La Liga to be much more visible because Africa is a big football market and I believe in the nearest future we will do so,” Mutiu assured.

“The objective is to be No. 1 both on and off the pitch.

“La Liga is No. 1 football wise – it’s a competitive league, Barcelona and Real Madrid are the richest, but the league is trying to control the spendings of the clubs and so the likes of Atletico Madrid, Seville and Valencia are now contesting with the big two.

“But marketing and media wise, we hope to also be No 1.

“In two years, we hope to be the market leader with the biggest media visibility in Nigeria.”

And he also agreed that a stronger presence of Nigeria talent in the Spanish top league will help millions of Nigerians to relate better with La Liga.

“We believe that with time, the clubs will sign some of the best players in the NPFL, but these players need to work harder for them to compete at a top league like La Liga,” he implored.

“They need to work on their skills, speed, character and understanding of the tactical demands of La Liga.”