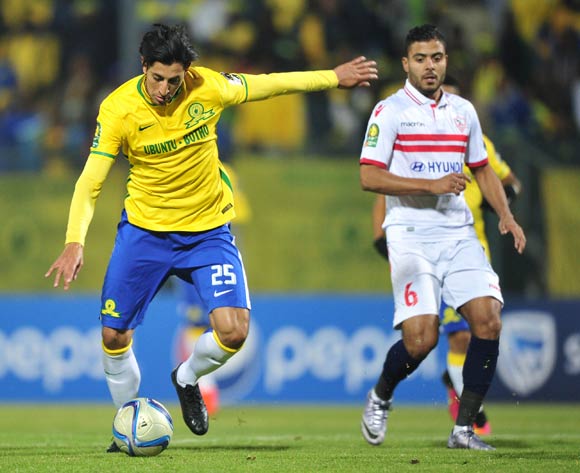 Leonardo Castro of Mamelodi Sundowns challenged by Ibrahim Ekhaek Sayed of Zamalek during the CAF Champions League match between Mamelodi Sundowns and Zamalek at the Lucas Moripe Stadium in Pretoria, South Africa on July 27, 2016 ©Samuel Shivambu/BackpagePix

Southern African duo Zesco United and Mamelodi Sundowns will meet for the first leg of their CAF Champions League semifinal on Saturday afternoon. Kick-off at the Levy Mwanawasa Stadium in Ndola is set for 15h30 CAT.

Zesco earned their spot in the final four by finishing second behind Morocco’s Wydad Casablanca in Group A, while Sundowns topped the three-team Group B ahead of Egyptian and Nigerian giants Zamalek and Enyimba.

The Ndola-based Zambians have made history by reaching the knockout stages of the Champions League for the first time in their history and will be looking to become just the second team from their country to qualify for the final: Nkana Red Devils were runners-up to Algeria’s JS Kabylie in 1990.

Zesco coach George Lwandamina argues that his side, who lost to Sundowns in friendly matches last year, have nothing to fear from the South African champions, though he admits it will be a tough semifinal tie.

“Do we have to fear them because we have lost to them in friendlies?” Lwandamina said. “This is the Champions League and it has its own motivational factors so you cannot bank on what happened in the past.

“I have never played them because every time they were in the country, I was out. Of course I don’t know much about them but the motivation that this type of competition carries will be able to motivate the boys to do better. I know it will not be an easy game because all games are difficult.”

Sundowns, meanwhile, are looking to appear in their second Champions League final, having been beaten to the trophy by Al Ahly in the 2001 edition.

Zambian goalkeeper Kennedy Mweene has warned his team – who are in the midst of ridiculously busy schedule and suffering from fatigue and a series of injuries – not to underestimate his compatriots.

"They have a lot of good players, especially up-front. They have Clatous Chama. He is a winger and they also have [Jesse] Were,” explained Mweene.

“They are dangerous players. If we do not pay attention to them, they can hammer us. It will be tough, but we have done our homework. We are familiar with the conditions in Zambia. We have played there before [during pre-season last year] and we know the place properly.”

The return match is set for September 24 at Loftus Stadium in Pretoria. Madagascar referee Hamada Nampiandraza will take charge of the action on Saturday afternoon.