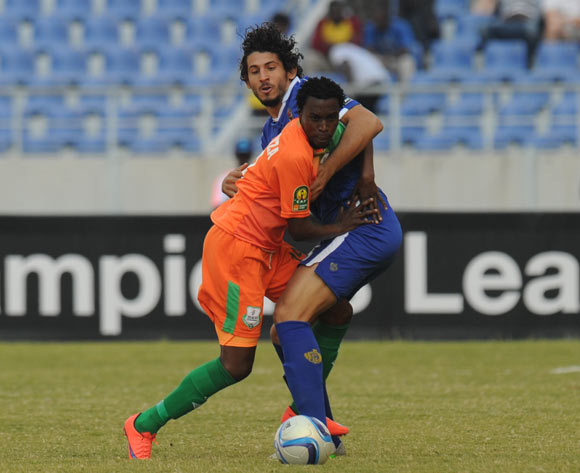 A late Khama Billiat strike gave Mamelodi Sundowns an away goal advantage when they lost to Zesco United 2-1 in their CAF Champions League semifinal first leg at Levy Mwanawasa Stadium in Ndola on Saturday afternoon.

On the other hand, the hosts found the back of the net twice through Jackson Mwanza in the second half.

In the opening stages of the contest, George Lwandamina's men took the game to their visitors, but their decision making in the box failed to yield results.

However, in the ninth minute, Denis Onyango made a wonderful save to deny Jesse Jackson Were in a one-on-one situation right in front of the goal.

Against the run of play, Sundowns moved forward in the middle of the park, allowing Tiyani Mabunda to take a shot which was saved by keeper Jacob Banda in the 13th minute.

The first half ended goalless, though there was no lack of attacking intent from either team.

In the 55th minute, Jackson Mwanza put the hosts ahead when he headed a wonderful cross from the right flank to beat Onyango on his far post.

Two minutes later, Mwanza completed his brace when he deflected a free kick away from the d-line into Onyango's net, with the goalkeeper protesting for offside.

The Brazilians were under pressure in the final 10 minutes as Zesco nearly scored their third goal, but Asavela Mbekile made a crucial touch to deny the hosts in the box.

Substitute Anthony Laffor came close to bag one for the South Africans when he received a flick on from Kekana on the right, only for the Liberian to see his well struck shot over the cross bar.

With three minutes to go, Khama Billiat pulled one for the visitors as he received a sweet pass from Laffor from the right to finish in the box.

In the end, the Brazilians tried to get their second goal in the encounter, but it was too late as Team Ya Ziko held on to their 2-1 lead.

The second leg is scheduled to be staged in South Africa on Saturday, 24 September 2016.