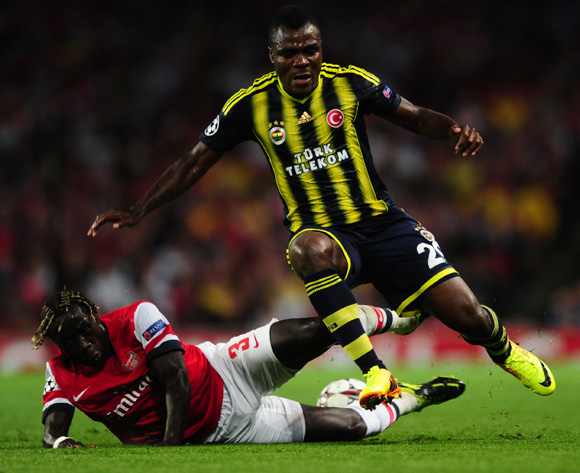 Emenike (right) in action for Fenerbache

The romance between Emmanuel Emenike and fans of Fenerbache has again gone sour after they booed the Nigeria striker after the win over Manchester United.

But the fans booed their Nigeria star after he missed several chances when he was introduced in the 68th minute.

Emenike was forced to go out on loan last season after his own club’s fans booed him, but it appeared everything had been forgiven and forgotten when he returned this season with a promise for everyone to start on a clean slate.

“He started very well when he returned to Fenerbache for this season, scoring some important goals and full commitment to the entire team,” a top source revealed.

“He even led team gatherings and really looked like a man who had put the past behind him.

“However, in the last few days, he has fallen back to the old ways, behaving again like a prima donna.

“He drove out in his own car and not with the rest of the squad in the team bus after a recent game.

“He’s clearly not happy he does not start games these games.

“And he has been accused of not celebrating with other teammates who score goals.”

The discontentment around Emenike led to his own club fans booing him again on Thursday night raising fresh questions about his future at Fenerbache.