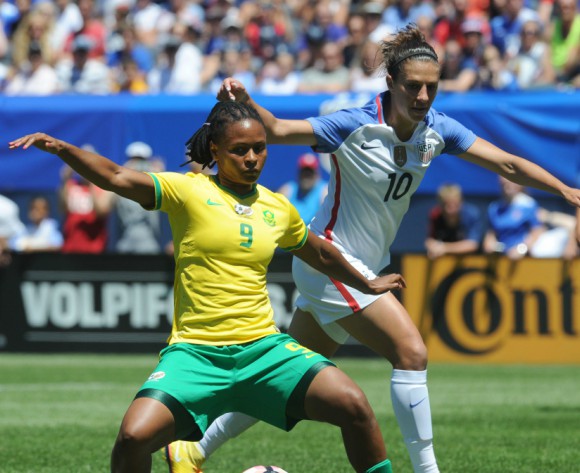 Despite having selected a good squad for the tournament including a friendly against Zimbabwe, Ellis has excluded three key players.

Ellis announced her squad on Tuesday at SAFA House in Johannesburg and dropped ex-skipper Amanda Dlamini from her team to participate in the women's continental showpiece.

Reports indicate that Dlamini was given an ultimatum to choose between work commitments and team, with the coach excluding her for the tournament.

“It’s unfortunate that this happened. I have always availed myself to represent my country because it means a lot for me,” said Dlamini to The Star website.

“I will still avail myself in the future if the coach wants me. There was a clash in my commitments because I have to be in Durban tomorrow to deliver a presentation - titled “Same Ball Game: Different Pay” - on the unfair salaries that women are paid compared to our male counterparts.”

NIGERIA SKIPPER MIKEL: A DRAW WITH ALGERIA WON'T BE A BAD RESULT

Meanwhile, Ellis has also left out the overseas-based duo of Roxanne Barker (Netherlands) and Jermaine Seoposenwe (US) who missed the Egypt friendly and will not be travelling with Banyana to Harare on Wednesday.

“We are tied by the FIFA rules in their situation. These two matches are outside the FIFA calendar. The match against Zimbabwe is going to play a big part of our preparations for the tournament,” adds Eliis.

“She (Dlamini) also wasn’t available for our match against Egypt which means she would have missed two matches that are valuable to our preparations.

“We would have made the same decision if she wasn’t available for a camp. It’s unfortunate. What message would I be sending if I allowed someone to come and go?.”

Banyana are in group A alongside Cameroon as hosts, Egypt and Zimbabwe.