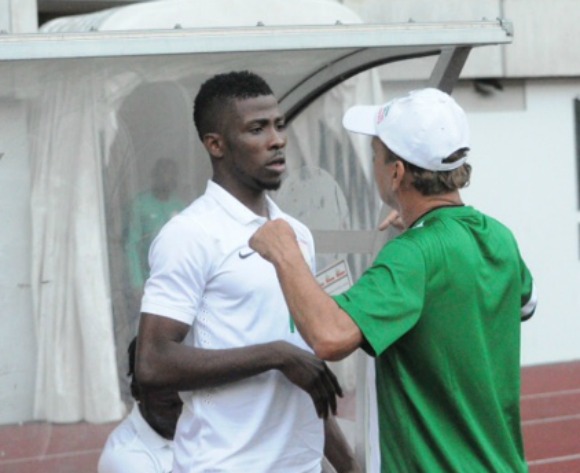 Ahead of the 2018 World Cup qualifier against the Fennecs of Algeria on Saturday, there are a few patterns that are emerging in the Nigeria training camp ahead of the game.

While nothing can be confirmed yet as they still have two days of training before the team selection is done, there are however a few things that can be discerned from the how team has prepared between Tuesday and Wednesday.

Let’s take a look at FIVE things that could play out on game day that could take the fans, and even the Algerians by surprise -

1. ALAMPASU COULD BE IN GOAL

While this cannot be confirmed yet, but it does seem the 19-year-old will get his seniot international debut against the Algerians, if what has been seen from their training sessions are anything to go by.

Daniel Akpeyi is the most experienced goalkeeper in the fold and is the popular choice to play on Saturday, but selection patterns have so far suggested Alampasu might be the one selected.

The Feirense of Portugal attacker only arrived on Tuesday afternoon and had only his second training session with the team on Wednesday morning, but it does look like he will start on Saturday.

His first cap for the Super Eagles came in March against Egypt in Kaduna in an Africa Cup of Nations qualifier, and he started and scored Nigeria’s goal in the 1-1 draw. He could be in line for another start on Saturday.

3. AHMED MUSA ON THE BENCH AGAIN

Vice-Captain Ahmed Musa will most likely start this game from the bench, if the emerging pattern were to be followed.

The Leicester City winger appears to have lost his place to Alex Iwobi and the returning Victor Moses, and just like it was in Ndola last month against Zambia, he is most likely to start from the bench again in Uyo.

4. IHEANACHO AS CENTRE-FORWARD, IGHALO AND IDEYE ON THE BENCH

It appears the Manchester City youngster will start as the centre-forward ahead of the more experienced Odion Ighalo and Brown Ideye.

Both Ighalo and Ideye have not been firing for the Super Eagles, while Iheanacho has scored twice in his last two games for the team and it does seem that Gernot Rohr will hand him a starting position as Nigeria’s number 9 on Saturday.

5. KENNETH OMERUO AT LEFT BACK

Omeruo, 23, played right back for the most part during his loan spell at Ado Den Haag in Holland, and one wouldn’t have been surprised to see him deployed to that position on Saturday, but left back?

Well, if the indications are anything to go by, he will play there against the Algerians.

Elderson Echiejile only joined the team on Tuesday evening and didn’t train until Wednesday morning, while Kingsley Madu doesn’t look like he enjoys Rohr’s confidence at the moment, so when the game kicks off, do not be surprised to see Omeruo at left back.