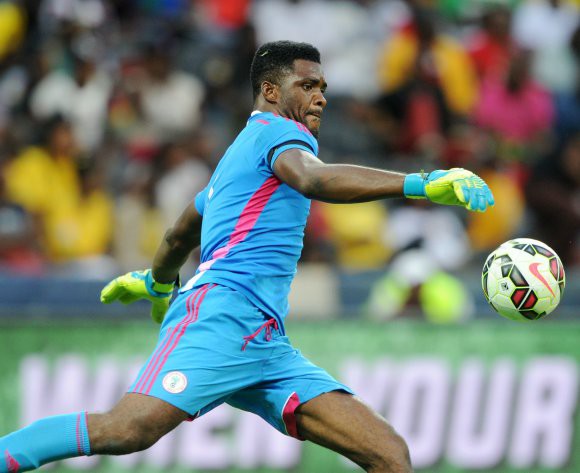 The experience of South Africa-based goalkeeper Daniel Akpeyi has won him a starting place in tomorrow’s World Cup qualifier against Algeria, but youngster Dele Alampasu pushed him all the way.

With first-choice Carl Ikeme ruled out of the match due to injury, speculations have raged on over the goalkeeper to be between the sticks against the Desert Foxes.

Portugal-based Alampasu has shone in training, but he will not be considered for the No.1 spot because he has yet to make his full international debut after appearances for the country’s U17 and U20s.

FC IfeanyiUbah star Ikechukwu Ezenwa lost out because the Nigeria league has been on break for the past six weeks, officials informed.

“Akpeyi will be in goal against Algeria,” a team official disclosed.

“His experience won him his place.

“Otherwise, Alampasu has really impressed in training, but the coaches do not want to take a gamble on an uncapped player in such an important game like the match against Algeria tomorrow.

“The choice of the goalkeeper to start was not easy as various scenarios were looked at before it was finally decided to go with Akpeyi.”

Akpeyi also deputised for Ikeme in March in a 2017 AFCON qualifier against Egypt in Alexandria.