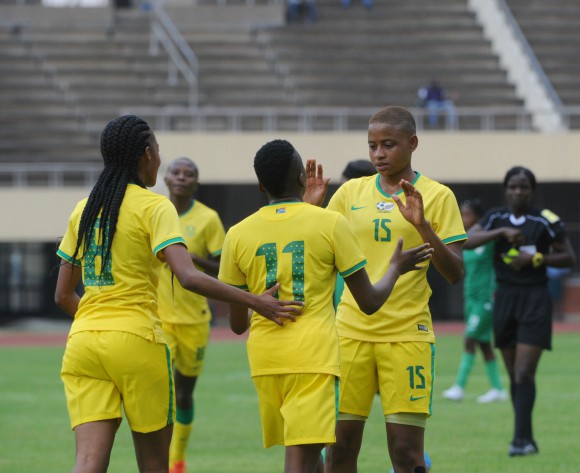 Banyana Banyana midfielder Thembi Kgatlana says their mission is to win the 2016 CAF Africa Women's Cup of Nations in Cameroon which starts this weekend.

The South African international was speaking to the media at the OR Tambo International Airport as they left the country to participate in the tournament.

Kgatlana says they are hungry as a team and will now fight to ensure they do better than the previous editions of the tournament.

Despite beating Egypt and Zimbabwe in friendlies building up to the tournament, the Banyana star believes both nations will still be difficult to beat.

“We are hungry. We have been at nine AFCONS and usually end up at No 2 or No 3. The mood in the team is good. We hope to take this one, especially since our group is not as tough as we had expected,” Kagatlana tells Daily Sun.

“Egypt have played against us and Zimbabwe know us. After we beat Zimbabwe 3-0 they probably went back to the drawing board to try and identify any weaknesses, making notes of where they can punish us. They are a good team and will want to fight back.

“The last time I played one game, for about 10 minutes. I didn’t have the experience of the African Women’s Championship. I hope to get more experience in this one.”

Coached by a former Banyana international in Desiree Ellis, the South Africans will get their campaign underway against the Mighty Warriors at the Stade Ahmadou Ahidjo in Yaounde on Saturday.