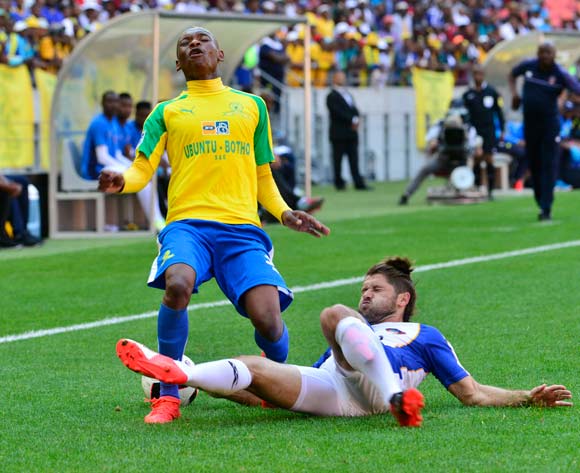 Mamelodi Sundowns head coach Pitso Mosimane faces an anxious wait to see if Khama Billiat will be fully fit for the Absa Premiership clash against Kaizer Chiefs at Loftus Stadium on Saturday afternoon. Kick-off is at 15h30 CAT.

Billiat - the reigning PSL Footballer of the Season - limped out of training with a suspected groin injury on Thursday morning. The Zimbabwean returned to Chloorkop earlier this week having participated in a 2017 Africa Cup of Nations warm-up clash against Tanzania in Harare over the past weekend.

Furthermore, Mosimane has been boosted by the return of Colombian striker Leonardo Castro.

MOSIMANE: CHIEFS HAVE AN UPPER HAND

The 27-year-old, who has successfully recovered from an ankle injury sustained during the club's 3-1 MTN8 victory over SuperSport United, is expected to start on the bench this weekend.

Mosimane believes Castro, who has attracted strong interest from Egypt, is ready to play 20 minutes as he still lacks the required match fitness, with 'Jingles' set to introduce the forward if his side are in need of a goal.

Mosimane's problems at the fullback position will cause him the biggest headache, though, with Siyanda Zwane, Anele Ngcongca and Tebogo Langerman also set to miss this weekend's showdown.

Langerman, having been released by Bafana Bafana after picking up a hamstring strain ahead of the 2018 FIFA World Cup qualifier against Senegal in Polokwane.

Anthony Laffor and Hlompho Kekana sat out of training, but are expected to play on Saturday with Uganda international Denis Onyango making good progress. Wayne Sandilands, though, could be in line to start with Kennedy Mweene having returned from Cameroon with a slight knock.

Moreover, the Brazilians' league clash against Bidvest Wits scheduled for the 7th of December is set to be re-scheduled as Sundowns intend to leave for Japan on the 5th.

The 2016 Caf Champions League winners are set to face either Auckland City or the winners of the 2016 J1 League in Osaka on the 11th of December. The victor of that clash will take on Colombian outfit Atlético Nacional in the semifinals of the 2016 FIFA Club World Cup.

Hlompho and his chargers ready to resume our PSL quest. #Sundowns pic.twitter.com/HWV9ZXtAHl