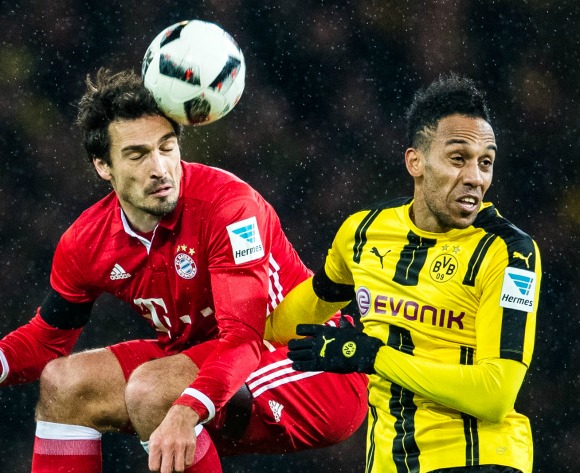 The 27-year-old converted Mario Gotze’s low cross in the 10th minute past Bayern goalkeeper Manuel Neuer for the only goal of the game.

This was his 12th goal of the season, putting him level with Cologne's French striker Anthony Modeste.

Aubameyang, who faced internal problems a few weeks ago after flying to Milan without permission, said he was pleased to have scored. “I am very happy that I can give this goal to my team-mates.”

The result sees Bayern lose top spot in the table to rookies RB Leipzig, who continued their stunning run with a 3-2 come-back victory at Bayer Leverkusen on Friday.

But with the world's attention focused on Dortmund for Der Klassiker, it was the home side that started quicker in the Signal Iduna Park, scoring with their first real chance of the game.

Dortmund won the ball back on the edge of penalty area, and the ball found its way to Gotze, who took the ball past one defender before sliding it across to an unmarked Aubameyang to tap home.

Julian Weigl had a chance to double the lead after a fantastic run, however his chipped effort was cleared in the six-yard box.

Bayern's best chances came from crosses into the box, with defender Mats Hummels and midfield Thiago Alcantara both failing to find the net.

Shortly after the break, Aubameyang wasted two fantastic chances from close range, before Bayern winger Frank Ribery had a goal ruled out for offside.

Another chance was missed by Dortmund’s goal scorer, as Bayern began to dominate possession and forced BVB deeper into their own half.

On a chilly autumn night in Dortmund, the temperature of the game increased as the clock ran down, with multiple players from each side clashing with each other. Adrian Ramos and Ribery were the main culprits, with both being booked.

The final chance of this tense match fell to Bayern’s ace finisher Robert Lewandowski, who had had a quiet game. The Poland international found some space in the penalty box before heading a Hummel's cross inches past the post.

Bayern captain Philipp Lahm, sarcastically said after the match that they had given Germans what they wanted. “It is nice for the league. Everybody was hoping we would lose.”

His coach Carlo Ancelotti said that he saw some things that pleased him. “I was happy with the performance, but obviously not with the result.”

Myke Mwai Mugo, who is the Sports Channels Director of StarTimes, the company that holds the African Bundesliga rights, said that even though the game produced just one goal, it lived up to its top billing.

“It was real end to end stuff and fans in the stadium and viewers throughout the world were treated to a top-notch match, the result of which throws the Bundesliga wide open,” he said.

Elsewhere in the Bundesliga, FC Cologne scored a dramatic late winner to take all three points in a 2-1 win against Borussia Monchengladbach, while there was also a late winner by Leon Goretzka in Wolfsburg as Schalke 04 beat the home side 1-0.

Mainz 05 beat SC Freiburg 4-2 in an entertaining game at the Opel Arena, while Ingolstadt got their first win of the season, winning 1-0 at Darmstadt. The final game on Saturday saw Augsburg play out a disappointing 0-0 draw with Hertha Berlin.