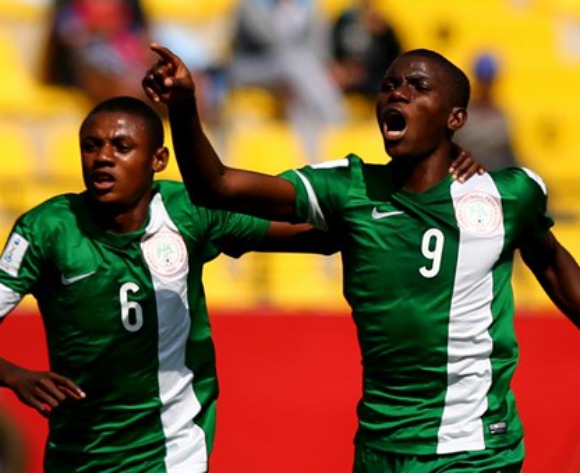 Kingsley Michael (left) with Victor Osimhen at last year's FIFA U17 World Cup. Nigeria will soon be calling these youngsters for the Super Eagles even after maltreating them at youth levels

In December 2013 and 2015, Nigerians the world over celebrated the brilliance of a crop of young, enterprising talents who stunned the world by winning the FIFA U17 World Cup in the United Arab Emirates and Chile, respectively.

Before then, Nigeria had previously won the U17 World Cup on three other occasions, a record that puts the Golden Eaglets head and shoulder above other countries at that age-grade category.

These achievements have seen talents discovered from age-grade competitions graduate to the Flying Eagles and later the Super Eagles in the last three decades.

However, this trend is about to end, if recent happenings in Nigeria football are anything to go by.

The Golden Eaglets, just like the Flying Eagles, failed to make it beyond the Africa qualifiers not because of lack of talent at that level, but because some persons failed to live up to their responsibilities,  thereby destroying the future of over 60 brilliant youngsters who possess the potential to thrive at the world stage.

The Flying Eagles team under Emmanuel Amuneke were one of the best sides ever assembled by Nigeria. These players, majority of whom have since signed deals with top European clubsides, fell victim to poor planning and neglect which eventually led to their unceremonious ouster in the final lap of the qualifiers.

After their elimination, a top official of the NFF was quoted as saying that "THESE ARE SOME OF THE SACRIFICES WE MUST PAY TO GO TO THE WORLD CUP". Imagine these coming from a man who should know.

Well the handwriting was always there for all to see from the start. The issues that led to the team’s elimination, the stories behind their unceremonious ouster, the robbery in Lagos and how some individuals mortgaged the interest of the team for personal gains will form the basis of my next feature.

Not many knew that in the midst of the crisis that rocked the Flying Eagles in Lagos, the Lagos State Governor Akinwunmi Ambode came to their rescue, but as I said, the story behind that and will be exposed in the days to come.

Well the good news is that out of that group, almost half the team have since sneaked out of the country to sign lucrative contracts abroad.

These ones and others like Zakari Lukman, who had already joined CS Sfaxien of Tunisia even before the qualifiers, and Agor Chukwudi, who is reportedly on his way to Holland, will someday be invited to play for the Super Eagles.

These same people who have forgotten the inhuman treatment meted out to them at the U20 level will one day call them up for national duties and if they turn down the invitation, they will tag them unpatriotic.

But we cannot continue to treat our players like slaves. A player needs his national team just like the national team needs these players.

We cannot because we want to go to the World Cup destroy our youth teams. The way and manner these players were treated in the national camp is nothing to write home about and three months after the qualifiers, their outstanding bonuses and camp allowances are yet to be paid.

Everyone seems happy because the Super Eagles are Flying high presently but they forget too soon that the cry of the poor is always taken seriously by God.

We cannot continue to pretend as if all is well when we know all is not well.

In 2017, no Nigeria male team will participate at the global football fiesta, just as the Super Eagles will not be part of the Nations Cup and we are here celebrating veterans, disguising as youths in the current Super Eagles team, even as the future of over 60 budding talents has been wasted due to carelessness of a few individuals.

The Super Falcons team we saw against Ghana at the women’s AFCON in Cameroon were twice the ages of the youthful Black Queens and the result after 90 minutes told the story.

The U17 girls (The Flamingoes) returned from Jordan with tales of woes, same as the Falconets who came back from Papua New Guinea with bitter pills that were very difficult to swallow.

These players who are in pains today, will be the same ones to be relied on tomorrow to bail Nigeria out of very difficult situations.

We must therefore do something urgently to appease these youth teams, we must make all these young players happy again, if we truly want God to answer our prayers going forward.

We cannot continue to pretend that all is well when in truth it is not. We can’t say we are born-again while we leave others in pain and tears. These sufferings must stop.

A stitch in time saves nine.

People like the selfish idiots, Giwa, Dalung,Emma Ado, a ghanian decieving nigerians that he is a brother to late Stephen Keshia n some cheap hungry journalist, are the reason why nigeria football has bn struggling becos these lots hv bn doing everything to frustrate the very good, patriotic job of the Amaju Pinnick led Nff board. But they shud know this that nigerians know them n are watching n will react at the right time. They will never succeed in their evil plans, this I speak in the mighty name of Jesus Christ.