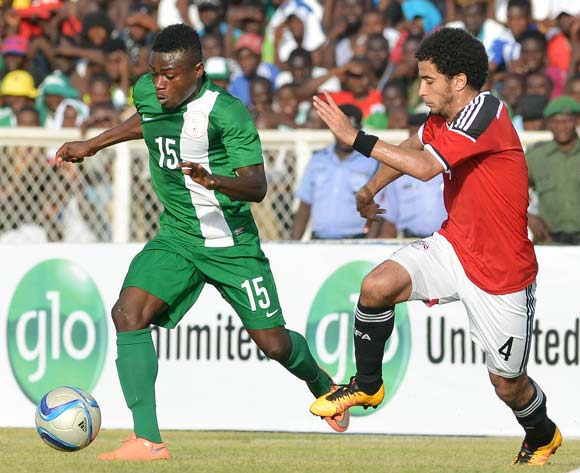 Simon Moses of Nigeria challenged by Omar Gaber of Egypt during the 2017 Africa Cup of Nations Qualifier match between Nigeria v Egypt on March,25th,2016 at Ahmadu Bello Stadium,Kaduna © Kabiru Abubakar/Backpagepix

President of the Nigeria Football Federation (NFF) Amaju Pinnick has confirmed a proposed friendly against AFCON-bound Egypt will no longer be played in January.

He said the friendly was off because there were some conditions Nigeria could not meet like parading the country’s top Europe-based professionals as it will not be a FIFA-friendly window.

Pinnick said they are now shopping for other friendlies for the Super Eagles as a result of this cancellation.

Egypt were earlier due to take on Nigeria in a friendly on January 9 in Dubai as part of their build-up to the 2017 AFCON in Gabon.

We had earlier reported that the game was likely to be called off because cash-strapped NFF demanded Egypt bear the entire costs for the game.