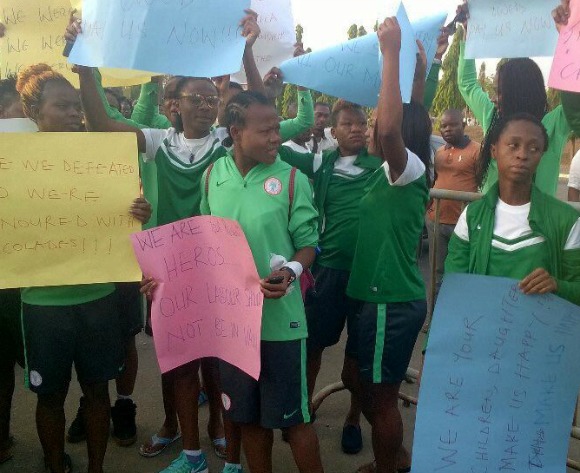 Falcons protest at the National Assembly in Abuja

Former Kano Pillars chairman Abba Yola has blamed a situation where the country’s female football team were forced to stage a protest march to press for their entitlements on sports minister Solomon Dalung.

He said a situation where the minister is made to bear the brunt of the many inadequacies of federation presidents is not acceptable.

He has therefore called on Dalung to stand firm in the face of recent intimidations from federation presidents or chicken out.

He is of the opinion that the minister should not allow himself to be ridiculed by individuals who feel they are untouchables because of the backing or immunity they enjoy from international bodies like FIFA.

Abba Yola further appealed to the minister to talk less and act more.

He said most of the problems the minister had found himself was because of his misguarded comments which have often times, attracted negative public backlash.

However, the director, Grassroots sports development in the sports ministry Ademola Are in his defense, says the minister was often misquoted by mischief makers who were paid to ridicule him.

A former public relations officer of the Nigeria football association, Austin Mgbolu, however believed that the way forward is for the minister to as a matter of urgency, release the Ibrahim Galadima report which was since submitted to his office.

He said this report and many others like it will provide a road map for football development in Nigeria.

Programme moderator, Gbenga Aruleba, said he is more concerned with the processes through which sports federation presidents are elected and questions a situation whereby a particular federation will continue to collect allocation from government but forbids government from meddling in their affairs.