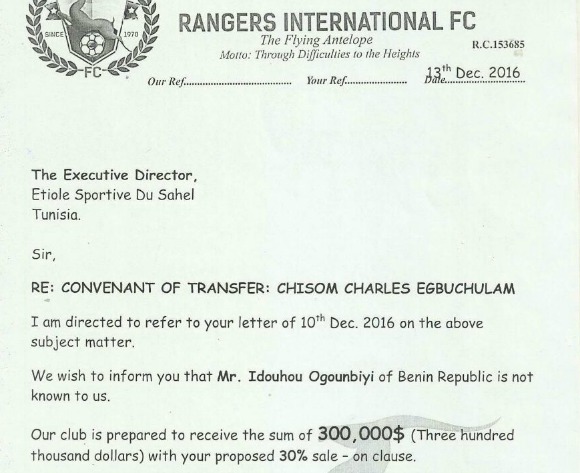 Rangers have made a dramatic u-turn as regards the transfer of Chisom Egbuchulam to Tunisian champions Etoile du Sahel, declaring him missing even after they have been negotiating with Etoile a transfer fee for the player.

An official statement signed by Rangers media director announced that Etoile are trying to poach Egbuchulam, who was not given permission to travel to Tunisia for any transfer negotiations.

A statement by the Director Media and Public Relations of Rangers Fc, Foster Chime, said the Board’s position is that the Tunisian club Etoile Sportive du Sahel have illegally poached Rangers FC player, Chisom Egbuchulam and Rangers FC have not agreed any terms with Etoile Sportive Du Sahel.

“Rangers FC did not give any official permission to Chisom Egbuchulam to travel to Tunisia or approval to leave his primary area of assignment,” read the statement.

“The club maintains that Chisom Egbuchulam can only be transferred for a fee of five hundred thousand dollars and still remains bonafide Rangers player till January, 2018.

“Rangers board also warns other interested clubs including Etoile Sportive du Sahel to steer clear of their player, Chisom Egbuchulam, but should open appropriate official. communications channels with Rangers Fc if interested in the player rather than circumventing the extant and stipulated NFF, CAF and FIFA rules to poach our player.

Rangers Intl FC Enugu have already officially communicated NFF, CAF and FIFA on the stealing/poaching of their player Chisom Egbuchulam by Etoile Sportive du Sahel of Tunisia, and warned that the club is ready to invoke all means at its disposal to protect their player from this unwanton act.”

However, it has also been uncovered that Rangers have officially communicated the Tunisian champions, demanding they pay $300,000 and agree a 30% sale-on clause in case of a subsequent transfer of Egbuchulam.

In a letter dated December 13, 2016 and signed by Rangers secretary Elder Joseph Onwukwe, put their request in black and white.

They also said they are not aware of a Benin Republic-based agent Ogunbiyi in this transaction.