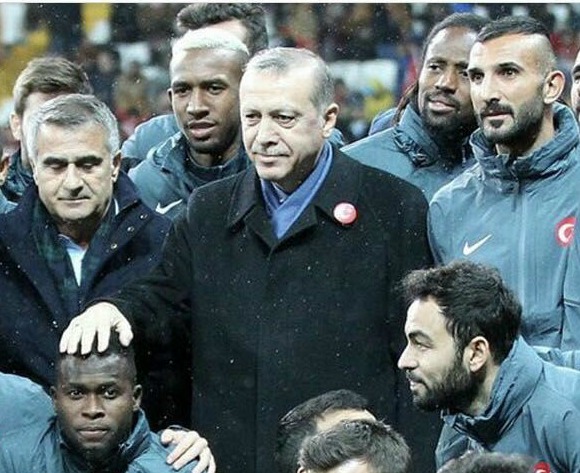 Nigeria defender Musa Mohammed is the new television star in Turkey after his one-on-one chat with Turkish President Recep Erdogan was beamed across the country during a benefit match for those who died in the bombing around the Besiktas stadium recently.

Musa coolly chatted with President Erdogan before the game.

And during the group photograph of the players with the charismatic President Erdogan, who also placed his right hand on Musa’s head leading to the Nigeria defender’s new nickname of ‘The Blessed One’.

“Musa has caught the imagination of the whole of Turkey after his close encounter with President Erdogan went viral across the country,” a top source informed.

“The media have now nicknamed him ‘The Blessed One’ after the President placed his right hand on Musa’s head during a group photograph.”

Musa, who has captained both Nigeria's U17 and U20s to major trophies, has enjoyed a splendid run in the Turkish cup and looks set to soon make his much-awaited league debut for one of Turkey’s most consistent clubs.

It is believed that President Erdogan has a close connection with Musa’s Turkish club Istanbul Basaksehir, who lead the Turkish Super Lig halfway through this season.