Rivers United ace Chigozie Ihunda out for 6 months after surgery 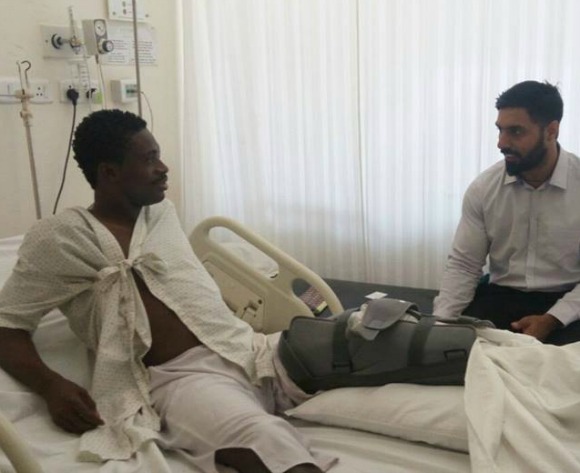 Chigozie Ihunda after his knee surgery in India

Rivers United defender Chigozie Ihunda has undergone a successful knee surgery in India and could now be out for six months.

Ihunda injured his left knee during United’s 1-0 win over Warri Wolves at the Warri City Stadium on May 8 and has not played competitively ever since.

The right back is currently in New Delhi, India where he has now undergone successful surgery and will now continue his rehabilitation with a view to returning to active competition.

Rivers United doctor, Chukwuemeka Agi, who is with the defender in India explained that the procedure which took place on December 24 was successful.

“Ihunda has been operated upon at the Artemis Hospital in New Delhi, India,” reported Agi

“We arrived in New Delhi on December 22 and he (Ihunda) had blood tests and Magnetic Resonance Imaging (MRI) done on the same day.

“We had a review with the surgeon on December 24 and agreed to have the surgery two days later.

“The surgery lasted for two hours.

“The operations that were done were in two phases; the first was a key hole surgery on the left knee while the second was an open surgery.

“He is currently in the first phase of recovery and we will now need to commence rehabilitation.

“He has already started minor physiotherapy which we hope will be good and effective.

“The time line for his return to action will be between three to six months but it could also be earlier depending on how the physiotherapy progresses.

“We wish to thank the Rivers State Government led by the Governor Ezebunwo Nyesom Wike for facilitating this trip and ensuring the career of this young man did not end prematurely.”

Ihunda who is recovering well after the surgery also took the time to discuss his current situation.

“This is an important moment in my career. Football is my life and I feared I may never play again,” he said.

“It is God that will bless the Governor and the Rivers State Sports Commissioner Boma Iyaye for the role they played in bringing me here (to India).

“I also want to thank my teammates for their support during my trying moments.

“Hopefully, I will be with them soon on the pitch to help Rivers United FC win things.”