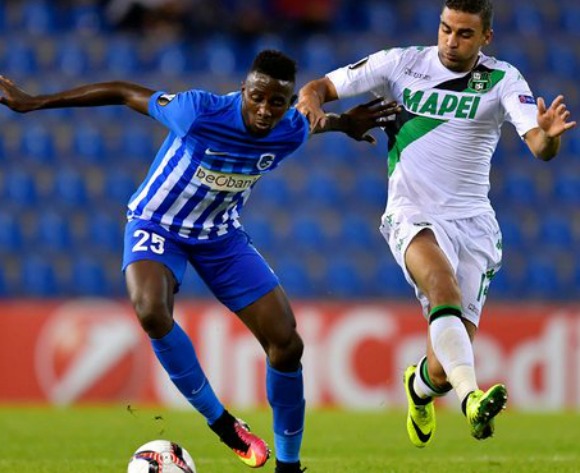 Ndidi (left) in action for Genk in Belgium

Leicester City-bound Wilfred Ndidi is now due to fly into England latest Friday after he would have been released by Belgian club Genk, his handlers have told AfricanFootball.com

Ex-Nath Boys of Lagos star Ndidi, 20, is now set to move to Premier League champions Leicester City in a transfer that will eventually total over £18 million.

“There is a process to how the player will come down to England,” one of Ndidi’s representatives informed.

“Genk, for one, will need to release him to start with and all this should be within 24 hours. And then Leicester will have to accept him.

“Don’t also forget that today (Tuesday) is the first working day after the long holidays and that will be when the club offices will be fully open.

“I believe that by Thursday, Friday he will be in England.”

The latest on the arrival of the highly-rated defensive midfielder comes at a time that it has been revealed that after interest by Manchester United, yet another Premier League club, Chelsea, also spied on him while he was playing for Genk.

According to The Guardian of London, Chelsea watched him in Belgium.

“Scouts from top clubs were now also keeping an eye on him. Chelsea sent one and Leicester scouts also became regulars at the Luminus Arena,” read The Guardian report in part.