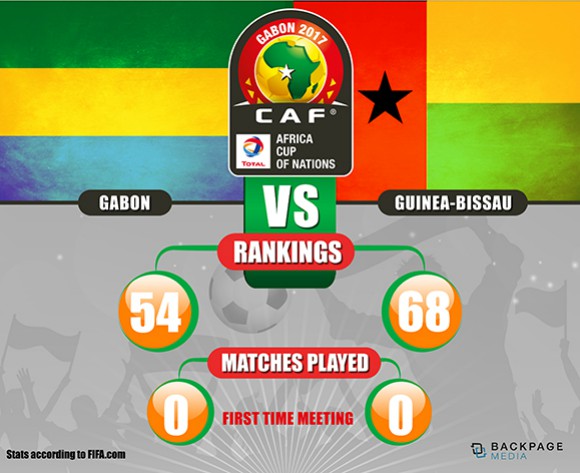 Welcome to our live coverage of the 2017 Africa Cup of Nations Group A clash between Gabon and Guinea-Bissau from the Stade de l'Amitié in Libreville.

85' - CHANCE! Frédéric Mendy misses a gilt-edged chance with only the goalkeeper the beat - the towering forward sends his attempt straight at the Gabonese goal-minder.

80' - Into the final 10 minutes of the clash and Guinea-Bissau, who have made all three their changes, will be expected to knock on the Gabon door as they aim to silence the home crowd.

72' - Toni Silva wiggles his way into a pocket of space, but can only see his resulting shot straight at Didier Ovono.

69' - CHANCE! Excellent work by Lemina who picks out Aubameyang - the Panthers skipper seeing his volley attempt inches over the crossbar.

60' - Gabon now bossing the show as they go in search of their second - the Panthers attackers seeing a lot of the ball.

52' - GOAL! Aubameyang delivers! Bouanga's cross poked home from close range by the Borussia Dortmund forward at the back post.

49' - CHANCE! Denis Bouanga cuts inside shooting at goal - Jonas Mendes with a good save to deny him as the Panthers go in search of the tournament opener.

46' - The second-half is underway in Libreville.

41' - CHANCE! Mario Lemina see's his header attempt wide of goal - the Juventus man only able to get a slight touch as he flung himself at the ball.

38'  - Home crowd getting a tad restless as Gabon struggle to break down the AFCON newbies ; Guinea-Bissau very disciplined at the back thus far.

31' - Still nothing to write home about in what has been a very tightly fought game so far. Zezinho with Guinea-Bissau's first shot in anger, but his attempt was always flying well wide.

20' - CHANCE! Aubameyang picks out Evouna who is unable to connect sufficiently with his header attempt, he then see's a curling shot well wide soon after.

15' - Aubameyang dropping deep to try and let those in behind the Guinea-Bissa defensive-line. Evouna and Lemina showing lots of energy, but the visitors are holding firm.

10' - Very equal opening 10 minutes with neither side having found their rhythm just yet. Aubameyang working hard to try and inspire his teammates.

5' - Nervy start by the hosts with Didier Ndong guilty of couching up posession in midfield on a couple of occasions. Stands filling up nicely with very few having watched the opening ceremony.

1'-  Kick-off in Libreville; Guinea Bissau in red attacking the goal to the right. The hosts in their traditional yellow and blue strip.