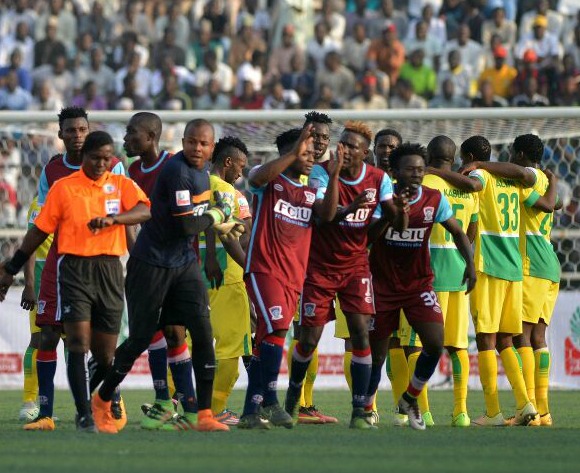 Ref Folusho Ajayi (far left) walks away from a melee of players after she controversially chalked off a goal by FC Ifeanyi Ubah against hosts Kano Pillars. PIX Kabiru Abubakar

The excitement was fever pitched as enthusiastic fans looked forward to another football season filled with brilliance and razzmatazz.

Much was expected, the dignitaries had all gathered and the atmosphere was doubled charged. Spectators from all walks of life flooded the venue like bees and at 4pm, the centre referee Folusho Ajayi blew the whistle signaling the start of the 2016/2017 Nigeria Professional Football League (NPFL) season.

Pillars came out from the start looking ready and turbo charged for war, the visitors retreated severally, but kept their cool until the 23rd minute, when home boy Gambo Mohammed struck.

The goal was greeted with a loud noise that vibrated beyond the premises, the executive governor of Kano State Umar Abdullahi Ganduje, who was special guest, nodded in appreciation as the home fans celebrated with aplomb.

FC Ifeanyi Ubah players and officials ran to the center referee informing her that the assistant referee raised the flag just before the goal was scored but her decision stood as the scoreboard read: PILLARS 1-0 FC IFEANYI UBAH.

That goal raised the tension, the referee suddenly became jittery and made several questionable calls that left many wondering why she should be in charge of such a big game.

References were given of  that controversial match in Jos which climaxed the 2015/2016 season and condemned Heartland of Owerri to the painful pit of relegation.

Kola Daniel, a sports journalist, saw the match from close quarters and has joined the bandwagon blaming the centre referee for the crisis at the Sani Abacha Stadium in Kano.

"The referee spoiled our fun today,” he said without holding back.

“If she was sure the first half was over, why award a free kick in the first place? She didn't only award the free kick, she went ahead to set the wall and ordered for the kick.

“Perhaps she wasn't sure of the dangers inherent until she saw the flight of the ball as it sailed beautifully into the net. Just as it landed, she blew her whistle signally halftime.

“That was uncalled for and highly unprofessional from her".

Yinka Elebute was another Journalist at the venue on Saturday and he was not quick to condemn anybody for the events that transpired, but he wondered how Folusho emerged as referee for a big match of this magnitude knowing her antecedents.

“Folusho Ajayi was at the center when Plateau United came from the dead to beat Heartland of Owerri 2-1 in Jos on the very last day of the 2015/2016 football season. On that day, she awarded a penalty to the home team and left Heartland crying blue murder after two questionable red cards,” he recalled.

“I remember vividly too her role in the crisis that erupted between Rivers United and Enyimba in Port Harcourt and I just feel she lacks the professional competence to handle such a big game.”

So if  these much was known of the referee before kick-off, how come she emerged from the blues as the center arbiter of a star match, in week 1 of the 2016/2017 Nigeria professional football league season?

Before we delve into that, it is pertinent we ask this salient question - who is Folusho Ajayi?

Not much was known of Folusho Ajayi till 2014 when she blossomed in the lower leagues with some eye-popping performances. Her brilliance with the whistle in her mouth soon catapulted her into the elite class of match officials.

In January 2015, she and 27 others were decorated with FIFA badges at a brief ceremony supervised by NFF president Amaju Pinnick.

Since then, she has grown in stature and profile, getting high-profile league matches and delivering to the best of her ability.

Even then, her interpretation of the rules of the game have severally come under scrutiny and Saturday's performance in the full glare of over 20,000 fans among them the executive governor of Kano State Umar Abdullahi Ganduje, has again  cast further aspersions on her  reputation and credibility.

A quick look at the law books explains why and when a football match can be stopped or prolonged at interval.

The books clearly states that in the case of added time after the conclusion of the first 45 minutes of regulation time, the center referee reserves the right to add extra minutes to cover for time wasted during infringements or substitutions.

The rules further states that after the expiration of the added time, the referee again reserves the right to call off the game at any point in time except in the event of a penalty.

The law permits that the penalty must be taken in that half before the whistle is blown as the action cannot be moved to the second half.

This rule absorbs Folusho Ajayi from any blame in the circumstances under review, but question mark still exists as to why she formed the wall, blew for the free kick only to stop the ball in flight as it sailed into the yawning net.

That is one for the referee assessor and the match commissioner to explain in their various reports that will be submitted to the appropriate quarters latest on Monday, January 17, 2017.

In a telephone conversation, the president of FC Ifeanyi Ubah, Patrick Ifeanyi Ubah, condemned the actions of his team manager describing it as “unsportsmanlike”.

He was quick to apologise to the governor and people of Kano State, the Nigeria football federation and the League Management Company over the behaviour of his team during the match and the subsequent decision to abandon the game in the 48th minute.

"I feel really pained and distraught knowing the implication of this action on the image of the NPFL, a brand we have all jealousy guided and celebrated. The action of my team manager cannot be tolerated by FC Ifeanyi Ubah,” he said.

“For this reason, we have suspended him from our next four games and placed other punishments on him for bringing the game into disrepute.

“FC Ifeanyi Ubah is a super brand. We only recently signed a mega partnership deal with West Ham United of England that has placed this team on the world map.

“We will not want to rubbish the brand by indulging in activities that are contrary to what we have set out to achieve as a team.”

The League Management Company is expected to come out with their position on the matter within the next 48 hours.

As the anxious wait continues, analysts have appealed to the LMC to thread softly in dealing with the offenders, knowing the intricacies involved in matters of this magnitude.

They have also adviced that any negative action or otherwise, could affect the league going forward and on FC Ifeanyi Ubah, who have so far displayed professional and unquestionable conduct in winning the Federation Cup and the Charity Cup all in three months.