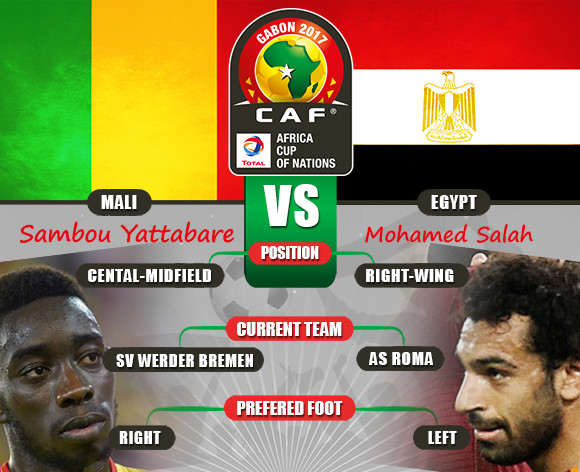 Hello and welcome to the live commentary of the 2017 Africa Cup of Nations Group D game between Mali and Egypt at Stade de Port-Gentil on Tuesday January 17.

90+3 – Full time – It ends goalless, Mali and Egypt move to a point apiece to be level in second place in Group D behind Ghana.

90 – There will be three minutes of added time. Will one of these teams be able to snatch a late winner and join Ghana on three points?

88 – Yellow card – Samba Sow is booked for a hand-ball in the Egypt box.

85 – Moussa Marega with a half chance as he runs onto a through ball which takes him wide in the penalty area, but Essam El Hadary makes a superb intervention to snuff out any hint of danger.

80 – Mali with a couple of threatening moments, the best of which saw Ousmane Coulibaly head over the crossbar from a flicked-on free kick.

75 – Fifteen minutes to play. There’s been some quality play out there tonight, but in general the final cross or shot hasn’t quite been up to the highest standard. Hence the blank score line, but there’s still time for that to change...

67 – Yellow card – Mohamed Salah is the first into the book for a studs-up challenge on Yacouba Sylla.

65 – Substitution – Mali send on Yves Bissouma in place of a limping Sambou Yatabare.

60 – An hour gone in Port-Gentil, Mali are looking to get back to the kind of dominance they enjoyed at the end of the first half, but Egypt’s swift passing and movement is proving difficult to match.

55 – And the Pharaohs continue to press for the opening goal, with Marwan Mohsen sending a diving header on target which forces a fine save from Oumar Sissoko to put the ball over for a corner!

50 – Tarek Hamed gets a shot on goal from a free kick, but it’s an easy save for Oumar Sissoko. Egypt look full of intent in the opening minutes of the second stanza.

46 – Back underway in the second half, no changes from either side at the break.

45+3’ – Half time – It’s goalless at the break. Nothing to separate the teams so far, let’s hope for some goals in the second half.

45 – There will be three minutes of added time. Mali are enjoying a strong period right now, putting in plenty of dangerous crosses from the wide areas.

40 – Closing in on half time, neither side has really stamped their authority on the game but a goal before the break could go a long way in deciding this one.

35 – Egypt creating a few half chances as they up their intensity, the best of which saw Mohamed Elneny slice a volley wide of the mark from the edge of the penalty area.

30' - Molla Wague with a powerful header from a corner kick but it's over the crossbar. The Malians have a tall, strong team and look a real handful at set pieces.

25' - Substitution - Essam El Hadary replaces Ahmed El Shenawy, with the goalkeeper seeming to have picked up a knock in making that earlier save. For El Hadary it's a bit of history, with the 44-year-old setting the record for the oldest player at an AFCON.

20' - A worry for Mali as Sambou Yatabare receives some treatment, but he's soon up and running again. The Eagles will hope their key midfielder hasn't suffered any kind of serious knock...

15' - Mali so close to a goal after Moussa Marega's cross is missed in the middle of the box and nearly sneaks inside the far post, but goalkeeper Ahmed El Shenawy scrambles across to palm the ball away!

10' - Mali now coming into the game more strongly. The West Africans aren't afraid to use the long ball in behind the defence, knowing that they have a pace and power advantage against the Pharaohs.

5' - Egypt have settled the quicker of the two teams and have an early chance through Marwan Mohsen, whose turn on the shot is blocked by Oumar Sissoko!

1' - Kick-off - We are underway in Port-Gentil! Mali wear all-yellow, while Egypt are in red, white and black.

20h55 - The players are out on the pitch and the national anthems are being performed.

20h30 - Half an hour to kick-off at Stade de Port-Gentil. Our referee for this evening's match is South Africa's Daniel Bennett.