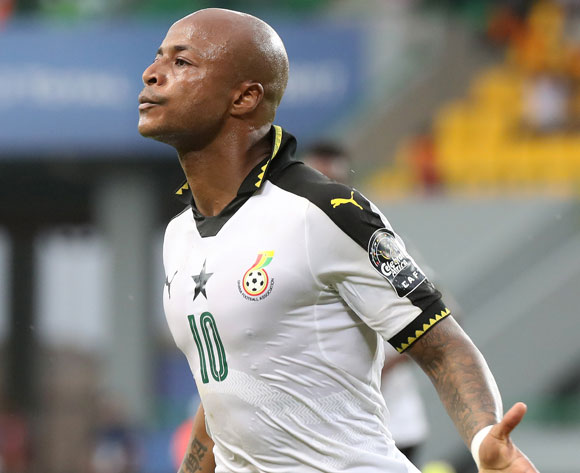 Despite putting up a gutsy performance, Uganda succumbed to a 1-0 loss at the hands of Ghana in their 2017 CAF Africa Cup of Nations Group D match at Stade de Port-Gentil in Gabon on Tuesday evening.

A solitary goal in the form of a penalty through Andre Ayew gave the Black Stars their first win in this year's AFCON.

The loss means Uganda now sit at the bottom of the standings with zero points in the group from their opening loss.

The Group D encounter got off to a bright start as the Cranes surged forward and Tony Mawejje took a shot which was gathered by goalkeeper Razak Brimah in the opening five minutes.

However, it was the Black Stars who tried to find the back of the net when Asamoah Gyan tried a header in the 19th minute, but the experienced striker could not hit the target, with keeper Denis Onyango to beat.

Ghana piled pressure on the Cranes' defence and Christian Atsu's left footed attempt sailed over the crossbar in the 22nd minute, failing to trouble the Mamelodi Sundowns goalkeeper.

Six minutes later, Andre Ayew received a ball unmarked in the box, yet his shot lacked poison and Onyango collected with ease.

Thirty minutes into the match, Avram Grant's men received a penalty when Isaac Isinde lost the ball and pulled down Gyan in the penalty area.

Dede Ayew raised his hand to hand the Black Stars the deserved lead as he converted from the spot, ensuring Ghana went to the tunnel leading 1-0.

In an aim to respond, Milutin Sredojevic's men dominated the proceedings upon their return from the tunnel, with skipper Geofrey Massa taking a rocket shot from a set piece in the 68th minute which narrowly went over the crossbar.

Uganda switched off right in the 85th minute and nearly paid the price when Atsu too unleashed a powerful shot from close range, but Onyango produced a fine save.

The win takes the 2015 AFCON losing finalists to the pole position in the group with three points and one goal goal so far.