Egypt held 0-0 by Mali in Port-Gentil 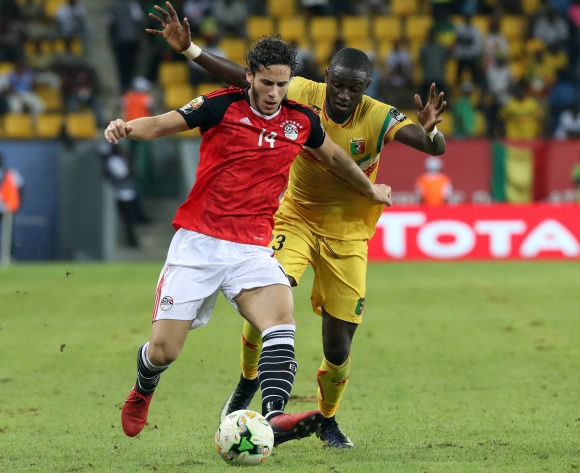 Seven-time Africa Cup of Nations champions Egypt marked their return to the tournament with a goalless draw against Mali on Tuesday night.

Neither side was able to establish any dominance in the Group D clash in Port-Gentil, allowing Ghana to establish a two-point lead at the head of the log after they beat Uganda 1-0 in the earlier game.

Egypt, playing in their first AFCON since 2010, settled quickly into a good passing rhythm and created the first half-chance on five minutes when striker Marwan Mohsen had a shot on the turn from a tight angle, but goalkeeper Oumar Sissoko made a comfortable save.

On 13 minutes Mali nearly claimed the lead when Moussa Marega’s in-swinging cross from the left flank was missed in the middle of the box and nearly snuck inside the far post, but goalkeeper Ahmed El Shenawy did enough to get across and palm the ball away.

In making the save, El Shenawy appeared to tweak a muscle at the back of his left leg and – after trying to play on – the goalkeeper was replaced by 44-year-old veteran Essam El Hadary midway through the half. The substitute set a new tournament record for the oldest player at an AFCON.

Those proved to be the major highlights of a first half in which Mali looked the stronger team overall, with the West Africans using their pace and power to good effect, though their final pass and/or shot didn’t quite have the cutting edge.

The Pharaohs were full of intent in the opening minutes of the first half and almost claimed the lead when Mohsen got onto the end of a cross and powered a diving header on target, only for Sissoko to make an acrobatic, finger-tip save.

Yet the Egyptian attack ran out of steam as the half wore on, with coach Hector Cuper replacing both star man Mohamed Salah and Marwan Mohsen. In response, Mali sniffed a chance to snatch the full three points and pushed hard for a late winner.

The Eagles were unable to capitalise on their dominance against a tiring opponent, with their best chances of a goal seeing Ousmane Coulibaly heading over from a free kick and striker Moussa Marega denied by a smart intervention from El Hadary inside the final 10 minutes.

The teams will return to action on January 21 for Group D’s second round of matches in Port-Gentil: Mali will face Ghana, while Egypt tackle Uganda.