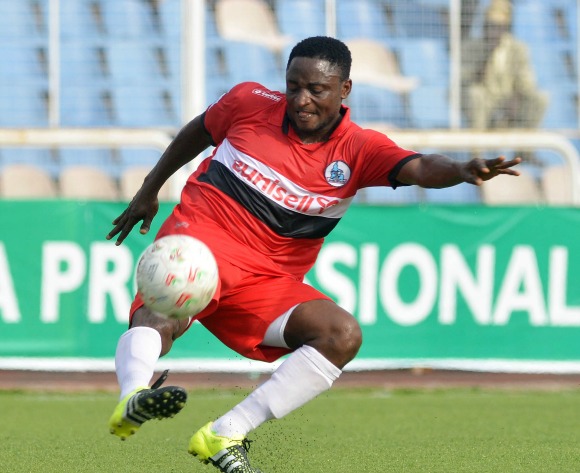 Ofem Innah - In action for Rivers United last season. he is now with Akwa United

Christian Pyagbara, Aremu Afeez and Ofem Onah who have been involved with Rivers United will hope to shoot down the Port Harcourt club today for new club Akwa United in continuation of the NPFL.

Aremu Afeez and Ofem Inah were both integral members of the Port Harcourt club that finished second in last season’s NPFL while striker, Christian Pyagbara was formerly on the books of Sharks FC, a side that was merged with Dolphins to form Rivers United on February 19, 2016.

The three players are now members of Akwa United FC.

Two of them, Pyagbara and Afeez, admitted that while it will be an emotional occasion for them this afternoon, there will be no mercy for the ‘Pride of Rivers’ as soon as they cross those white lines at the ‘Nest of Champions’.

“I am a Port Harcourt boy and I understand the history of Rivers United so facing that club will be very emotional for me,” said Pyagbara.

“But I am a professional so I know what my job will be – helping Akwa to win against Rivers United because they currently pay my wages.”

The midfielder revealed that it will be difficult facing his former employers.

“I don’t have a choice because the nature of this game means I have to face my former club,” he said

“I want to use this medium to appreciate fans of Rivers United for the love they showed me last season.”

Akwa suffered a 3-1 reverse at ABS FC on Sunday and will be keen to record their first victory of the season against an ultra-confident Rivers United side, who beat El Kanemi Warriors 2-1 in their season opener at the Yakubu Gowon Stadium.